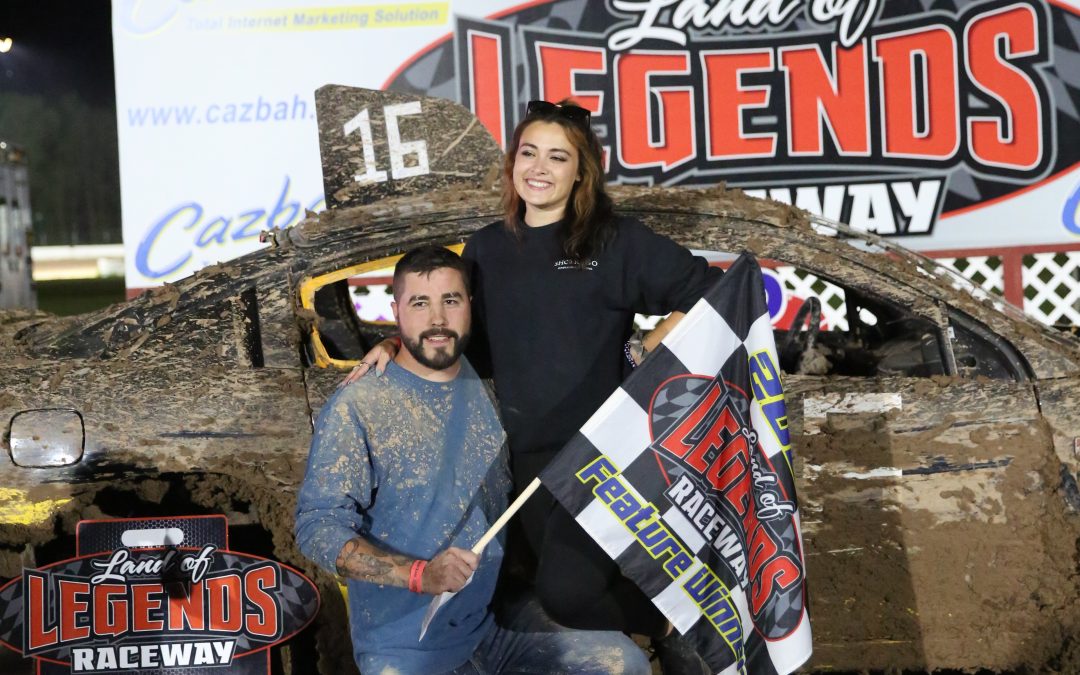 Proving to be the best out of 39 entries, Bauer from nearby Farmington kicked off the mid-week show with victory in the 6-Cylinder feature while Canandaigua’s own Archer triumphed in the 4-Cylinder finale that attracted 53 full-fender racers.

Both twin 50-lap main event winners collected the first-place prize of $500 and locked themselves into pole-position starts for the 2022 Hangover spectacle scheduled for Jan. 1 at Land of Legends.

“The track started out rough but came in pretty good at the end,” remarked Bauer, who took his first lead on lap 13 and kept his Toyota Avalon out front the rest of the way to wrap up top honors. “No idea where I was, just hoped I could keep on going and try to finish. And here we are, we won!”

Bauer was the 15th driver to register for the event, putting him inside the eighth row to start the 25-mile grind. Kyle Wilkins and Jamie Smith traded the top spot in the early stages before giving way to Bauer nearly a third of the way through.

Brandon Hampton, Matt Gascon Sr. and Wilkins all experienced small fires under their hoods to require quick red flags, yet back under green it was all Bauer as he remained steadfast on the slippery speedway surface. Bauer built up a comfortable advantage when the final checkered flew, followed further back by Kyle’s twin brother Kale Wilkins ($200) and weekly Canandaigua contender Jamie Eldredge Jr. ($100) in the final payoff positions.

Mid-pack seemed the place to be on this night as Archer filed in 16th on the starting grid to begin the nightcap. Shawn Tidd held the lead early from his no. 1 starting assignment before giving way to Jeff Landuyt then a hard-charging Matt Gascon Jr. who unlapped himself just in time to take over first on lap 22.

Devon Davis inherited the top spot when Gascon slowed soonafter, Davis himself dropping off the pace to afford Carter Bradley a brief run from the point. Still more attrition followed, providing Archer with his first lead at the lap 35 mark, one he would not relinquish despite a late-race rally from eventual runner-up Pat Kerrick who earned $200 for his effort. Prominent engine builder Jeff Hand secured third to take away $100 on his walk through the midway.

“I was saving it to the end, figured it was time to kick into gear,” commented Archer, next door neighbor of LOLR street stock pilot Blane Smith, who unknowingly gave up the lead for a moment to Kerrick on lap 43 as the lead pair diced through turns one and tow, yet rebounded down the back chute aboard his Saturn to regain first and cruise home the remainder of the way. “But all I had was second gear. It was tough out there with all the mud, had one tear-off and it didn’t last too long.”

If you can’t make it out to the race track this season, LIVE video coverage of every event can still be enjoyed weekly through Land of Legends TV as for the first time ever all LIVE streaming will be offered FREE in 2021. On-line registration at https://landoflegendstv.com/orders/customer_info for a free account is the only step to take.

Also available for download is the LOLR mobile app found at Google Play
https://play.google.com/store/apps/details?id=com.goodbarber.landoflegends or
App Store
https://apps.apple.com/us/app/land-of-legends/id1508128970?uo=4 to secure your raceday pass today.
In 2021 weekly ticket prices are set at $15 Adults, $13 Seniors, Kids under 16 FREE. Camping is FREE at all race events. To purchase ticket and pit pass bundle packages in advance or discuss marketing opportunities available at the track this season, please contact LOLR Marketing Director Tana Robinson via e-mail tana@landoflegendsraceway.com or cell 716-799-5669.

With the 58th season now officially underway, be sure to follow the point standings and breaking news online by visiting www.LandOfLegendsRaceway.com.