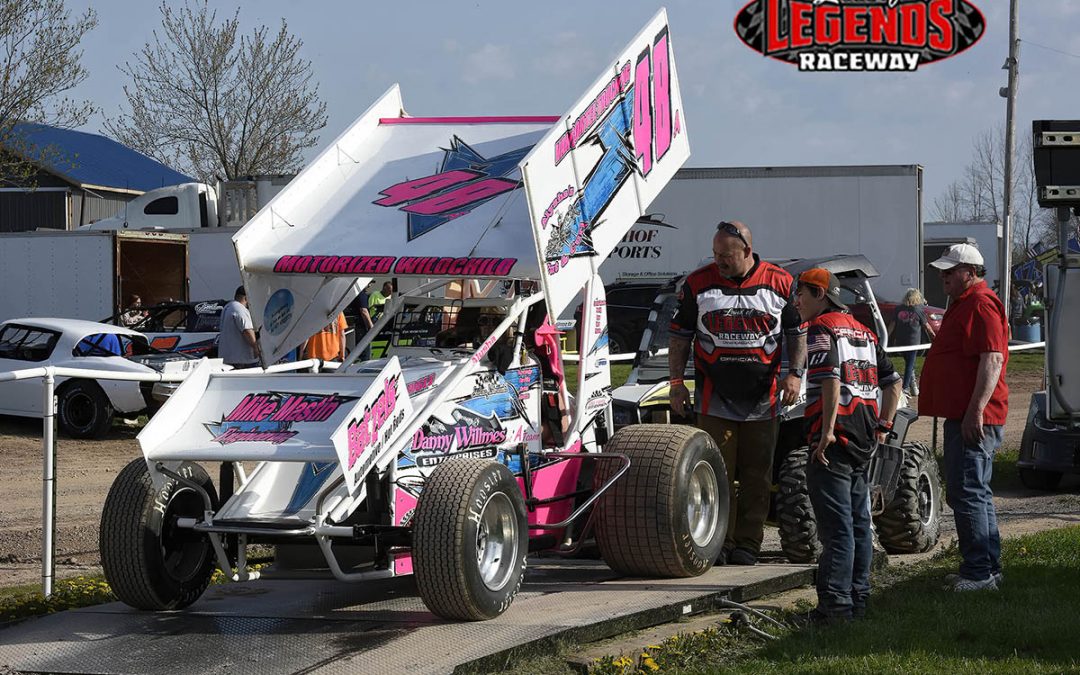 After an unseasonable mix of rain and snow blanketed Ontario County to force cancellation of any trackside activity scheduled over the past two weekends, Land of Legends Raceway roared to life Tuesday evening to the delight of a few hundred eager fans and more than 60 hungry racers that flocked to the fairgrounds for what amounted to the lone practice period leading up to the long-awaited 2021 lid-lifter.

Reigning Canandaigua MEM 305 points champion Alysha Bay was the first to hit the hallowed half-miler as the winged machines put heat in their motors while second-year Sportsman campaigner Tim Lafler was the initial car up to speed in the first of three practice sessions provided each class.

Defending track champions Matt Guererri (Sportsman) and Tyler Burnell (Hobby) also made the tow as drivers in Big-Block Modified, 358-Mod, Street Stock, Late Model and 360 Sprint Car classes comprised the stellar field. Piloting their 360 Sprint cars, the father/daughter duo of Chuck and Kelly Hebing posted the quickest times during the night with Chuck turning in a 15-second (113mph) lap followed by Kelly in the 112mph range.

2021 SEASON HIGHLIGHTS
While the original season-opening ‘Cabin Fever 40’ for DIRTcar Sportsman was ultimately dropped due to early season weather conditions, a number of special events still jam the Canandaigua calendar during the upcoming months.

The high-flying Empire Super Sprints return to Canandaigua on July 1 while the lone Patriot Sprint Tour shootout is slated for Aug. 7. A trio of CRSA Sprint Car events are on the docket May 22, June 19 and Aug. 14.

With the Fall season soon to follow, Cole has inked a unique ‘Full Fender Frenzy’ on Sat., Sept. 11 featuring a Rush Crate Late Model Series event alongside the Top Gun Shootout for Street Stocks plus a doubleheader for Hobby Stock and 4-Cylinder teams.

Led by Art Rorick, the LOLR TV production team of Brad Ovens and chief camera operators Mike Lawler and Bob Miller is once again geared up to provide LIVE video coverage of every event exclusively through Land of Legends TV. And in an unprecedented move this season, all LIVE streaming will be offered FREE in 2021.

On-line registration at https://landoflegendstv.com/orders/customer_info for a free account is the only step to take.

Also available for download is the LOLR mobile app found at Google Play.

PRICE PACKAGES IN PLACE FOR ’21

In lieu of the more traditional ‘Season Pass’ provided in past seasons, Land of Legends management is again offering fans and race teams the chance to save money by purchasing General Admission and Pit Pass bundles. Unlike previous season passes, the LOLR Ticket/Pit Pass bundle allows freedom of use in different ways. Packs of 20 or 50 can be purchased and used throughout the upcoming season. If a 50-pack of Pit Passes is ordered, 20 complimentary General Admission tickets are included!

General Admission Bundle Tickets carry a value of $15 if used toward a Super DIRTcar Series event where GA prices are $25 Adults and $23 Seniors and kids under 16 GA $10. Weekly ticket prices are set at $15 Adults, $13 Seniors, Kids under 16 FREE. For those youngsters needing pit access, Child Season Pit Passes are $30 for 2 & Under and $150 for kids 3-14. Camping is FREE at all race events.

To purchase ticket and pit pass bundles or discuss marketing opportunities available at the track in 2021, please contact LOLR Marketing and Operations Director Tana Robinson via e-mail tana@landoflegendsraceway.com or cell 716-799-5669.

Check out www.landoflegendsraceway.com often as the latest news and season schedule information will be posted right up to raceday.