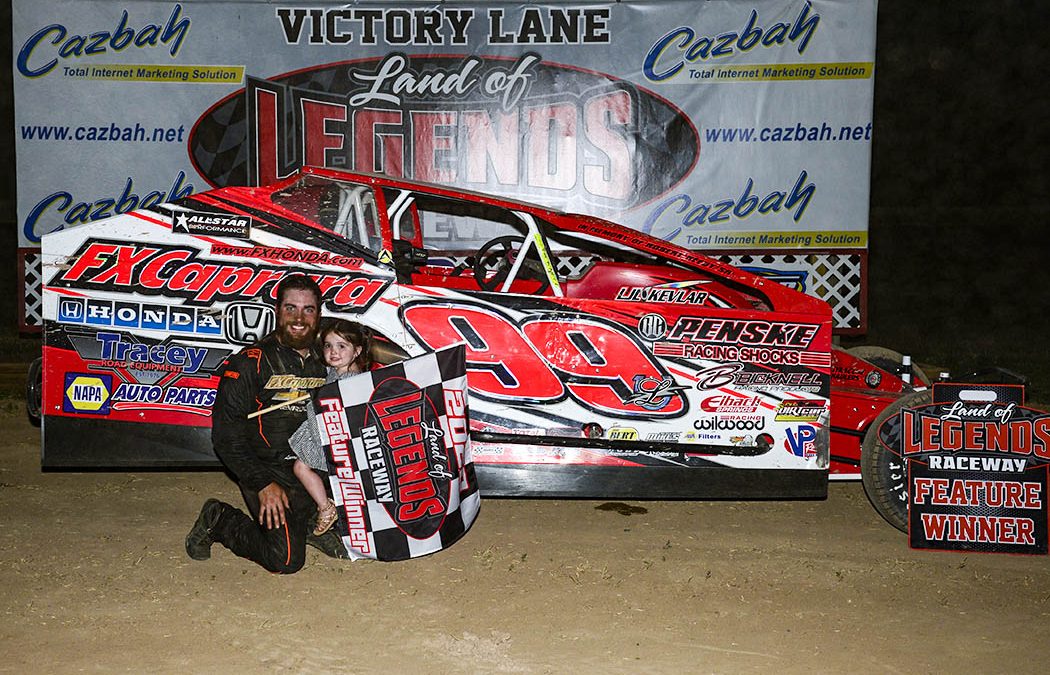 Both drivers appeared to have the quickest cars on the track Saturday yet right-front flat tires proved costly when it counted most; Root dropping from first to third place on the final lap while Wight vacated third and turned pitside with less than 10 laps to go en route to posting a disappointing DNF (did not finish) on opening night.

“Nice to be able to rebound from Saturday, think we definitely had the fastest car here then and had a tire go down and take us out of contention,” stated Wight, 27, following his second trip to victory lane at LOLR, his only other checkered flag taken in an Empire Super Sprint (ESS) A-Main in 2017. “Tonight we rebounded just like it was Saturday, track was phenomenal, a little bit of dust with the new surface but I’m sure Paul (Cole, promoter) will be able to figure out what he’s got to do with it.”

“The car was spot on what it was Saturday, pretty much that line up top was there again and we were able to stay pretty much straight up there. Once Peter (Britten) dipped down to the bottom of (turns) three & four I knew I had to gas it up and take advantage of it,” figured Wight, after collecting the $2,500 lion’s share.

Pole-sitter Britten rocketed out front at the drop of starter Scott Hixson’s initial green flag to kick off the 40-lap headliner. An early caution the second time around for Adam Roberts, who sat idle in turn one with a crunched front end, briefly slowed the action, once again bunching the pack for a lap two restart.

“On Saturday the tie-rod got bent a little when I got together with Peter and I checked up so not to t-bone him, that’s why I spun there,” recalled Wight, who was forced to re-start in the rear yet rallied back to third before a flat front tire on lap 27 sent him over the turn one embankment and eventually into the pits for a 21st-place finish. “Might have knocked the toe out a little bit.”

The potent LJL/Kevlar-powered red #99L FX Caprara Honda-Tracey Road Equipment Bicknell machine stayed perfect all night on Tuesday, although third Gypsum teammate Ward fell victim on this occasion. His own Bicknell ride made contact with Saturday’s runner-up Dillon Groover on the front stretch to force out a yellow flag as the no. 42P mount limped into the pits with a rear brake line severed.

Making another stellar run in his second straight Big-Block appearance at the Ontario County Fairgrounds, Tyler Trump ran sixth before contact in traffic with small-block entrant Ed Lawrence knocked him out with front-end damage and 25 laps in the books.

Starting 11th on the 26-car grid, Sheppard methodically worked his way to the front, on two occasions lifting his front end completely off the ground as he bounded low out of the second corner holding nothing back in tracking down the leaders. ‘Super Matt’ grabbed third from Britten on lap 21 yet needed 10 more circuits to slip under Friesen for the runner-up slot.

With the final 15 laps run caution-free, Wight rolled on to open a dozen car-length advantage under the checkers followed by Sheppard, Friesen, Alan Johnson, and Britten. Twelve of the 18 finishers completed all 40 laps.

“With all that moisture up top in 3 & 4 you could run in there just about on the deck,” remarked Wight, after running the extreme high side of the speedway the entire distance. “We were pretty much flat-footing it all the way around. So to shut it down and try it on the bottom, it just wasn’t gonna work. Especially restarting on the middle of the backstretch like it’s done here.”

“We (Gypsum team) plan to be back here next Saturday. As the races come out we’ll try to support the tracks that are opening up and giving us a chance to show our stuff,” added Wight, Super DIRT Week Modified 200 champion in 2018 after being recognized as DIRTcar Northeast’s Sportsman Rookie of the Year in 2007.

Oval track action opened Tuesday night with the Land Of Legends coming to life as Sportsman racers chased a $1,000 payday in 30 laps of feature racing.

Saturday winner Matt Guererri started on the point yet a lap eight restart was all Root needed to dispose of his front-row partner and the Geneva pilot remained relentless the rest of the way to post his first win of the season in Ontario County.

“Went to the top that one time and it stuck pretty good, and I didn’t think we were any good at all up to that point,” divulged Root, 41, who captured his first Canandaigua points crown last season with four wins to his credit. (Matt) was running the bottom so I just had a good opportunity on that restart to go to the top and that’s all she wrote.”

“You usually know if you got a good car or not. I did see the brown up there but didn’t know if (track crew) came out and watered it or not, looked a little wet when we were out there so I waited a couple laps to kinda get some of that dust up there to dry it off. Just thankful to get to the top. When you’re the leader sometimes you don’t know what to do and when nobody’s passing you, you just keep running your line. Hats off to Gibbs (Guererri), he’s going to be tough to beat this year,” Root noted.

Guererri assumed command of the top spot when the first green flag waved with Root in hot pursuit followed by veteran Kevin Ridley, rising star Zach Payne and first-year speedway regular Brian Fish. The Bicknell car of Tony Velez went up in smoke on lap four to incur the only racing-related caution period, while trackside debris in turn three forced the second and final slowdown on lap eight.

While Guererri easily pulled away from the pack with three laps scored, the lap eight restart proved pivotal for Root as he blasted out to a lead never to relinquish.

“Didn’t want to do what I did last time (Saturday), that lapped car kinda screwed me in the last race,” said Root, after contact in traffic with Troy Sperring cut his front tire on the white flag lap and forced the defending overall Mr. DIRTcar Sportsman champion to hang on for a third-place tally. “Maybe it was part my fault, maybe it wasn’t, either way it cost us a win last week. And I definitely wasn’t gonna do that again this time around. So I made it a little easier tonight, kinda watched the other guys a few laps to see where they were running and then just picked my poison.”

Once out front Root quickly extended his lead to 10 car-lengths and by halfway Guererri remained in second followed by Ridley and Garrison Krentz while Kyle Inman and Kane Bristol jockeyed for a top-five position.

While Root continued to patiently weave his way through traffic, Guererri closed in on Root to make a final bid for the lead on lap 19. With Jeff Davoli sandwiched tightly in between entering turn one, Guererri swept high while Root dove low yet the leader held strong and the order never changed.

At the wire it was Root by a convincing eight car-lengths over Guererri with Ridley, Krentz and Inman as 16 of the 18 starters remained trackside to see the checkers.

“I was real aggressive the other night for the most part and until one to go it worked out I guess,” Root said. “This time I just did what I had to do. Obviously, you gotta keep all four tires with air. Its unfortunate the last two races we should’ve won but we got two flat tires. This win definitely helps out but we still gotta get better because everybody else is going to. I feel great about this car, whole new package this year and right out of the box its been good.”

A 360 Patriot Sprint Tour special headlines the Wed., June 17 card with the 30-lap A-Main victor pocketing $2,000 while Sportsman return for another shot at the $1K top prize in 30 laps of feature racing.

Pit gates open at 4:00 pm and race time is 7:00 pm. With grandstand attendance still not permitted due to the social distancing mandates currently in place, LIVE video coverage will be provided for each scheduled race date and can be viewed on Land of Legends TV for $15.

With the 57th season now officially underway, be sure to follow the point standings and breaking news online by visiting www.LandOfLegendsRaceway.com. To discuss marketing opportunities available at the track in 2020, please contact LOLR GM Greg Emerson via e-mail gemerson@landoflegendsraceway.com.