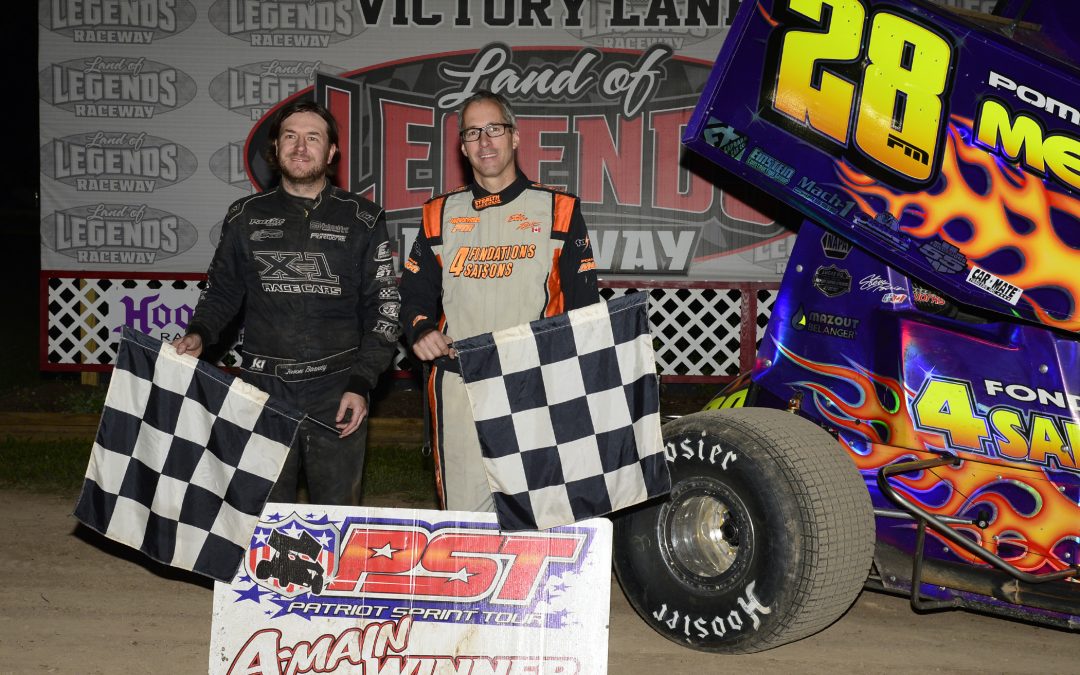 Filling out the Friday Frenzy, hotshot invader Josh Pangrazio ended the season of full-fender racing at the Ontario County Fairgrounds, earning his own $1,000 check after claiming top honors in the 8th Les Whyte Top Gun Shootout for Smith Bros. Drywall Street Stocks. The ‘female flash’ Alysha Bay enjoyed her second $750 payday in tour competition, beating all the boys to capture round #3 of the LOLR 305 Sprint CRSA Crown Series.

Despite gray skies overhead and a brief shower delaying the program start, opening day activity for the 360 Sprints attracted 26 teams, showcasing some of the best drivers in the region as they took on Canandaigua’s historic half-mile clay oval.

Passing points established the starting line-ups after Dylan Swernik joined Poirier and Barney with checkered flags in the three heat races. Experience proved to be the most valuable asset navigating around the ultra-fast fairgrounds layout as Poirier and Barney each needed just over four minutes to score decisive wins in their respective day one qualifying events.

“The track was real racey, had a couple of good grooves and starting in clean air was quite a bit of an advantage tonight,” remarked Poirier, 47, who led flag-to-flag to claim the lead-off 15-lapper aboard his potent flaming purple no. 28FM FM Industries-4 Seasons Foundations-Fuzion Electric-Mega Pumping/Eagle sprinter. “Tried some different lines where my car was comfortable, but it got a little loose at the end. We learned a lot tonight, hopefully the track won’t change too much because we’ve got a good set-up for these conditions.”

Pole-sitter Poirier jumped out front at the drop of starter Scott Hixson’s opening green flag and never looked back. The long haul from St-Mathieu-de-Beloeil, Que. paid big dividends as ‘Fireball’ out-distanced Thomas by 10 car-lengths at the stripe after a race-long duel for the last transfer position with Pennsylvania traveler Tyler Ross. Joe Trenca and Justin Barger rounded out the top-five.

“I expect more competition tomorrow as the track will definitely be more slippery and get wider so we’ll have to make the car better,” added Poirier, the defending and eight-time Lucas Oil Empire Super Sprints points champion with an ESS-best 74 career A-Main triumphs. “It will be a longer race with maybe more cautions. Tonight we were lucky to start up front and benefit from that, tomorrow we’ll need to improve a little bit.”

Barney left little room for improvement in his black no. 87 Factory Kahne-Pit Stop Convenience Stores-Patriot Tank Lines/X-1 entry, charging from third to overtake Preston on lap 12 before cruising home for a commanding 15 car-length victory in the nightcap.

“Jonathan’s been really good, when he starts up front he can really lay down a wicked pace,” noted Barney, 39, after the popular pilot from Brewerton posted some of the quickest laps of the night in his latest win in wine country. “I knew the race wasn’t very long and we weren’t going to get into a ton of lapped traffic so I needed to keep pace with him early.”

“I hit a couple good laps there, then hit a couple bad ones. Once I finally moved around a bit, following him around a little, I tried to do something different than he was and we were able to make up some ground. Got to that one lapped car and I think that slowed him down just a little bit where I could use a some momentum and get alongside him,” Barney figured.

Second-generation standout Preston easily pulled away from the pack in the second 15-lapper with seasoned chauffeurs Jared Zimbardi and third starting Barney on his tail. Barney ducked under Zimbardi as the pair diced down the smooth back chute on lap five and crept to within three car-lengths of the leader by lap 10.

Traffic proved pivotal in the late stages and Barney took full advantage, threading his way past Preston in a bold turn four maneuver to move to the point with three laps to go en route to the convincing victory. Zimbardi trailed Preston at the line followed by front-five finishers Steve Doell Jr. and Steve Glover.

“Wanted to come here and work on our car a little bit,” added Barney, himself and Poirier each owning five career A-Main wins at LOLR split between Patriot Sprint Tour and ESS competition. “The track was really great, and if its like this tomorrow that feature is going to be really exciting.”

The rebirth of the Les Whyte memorial tribute race generated the most excitement from Canandaigua’s die-hard full-fender fans when first announced, yet it was Oakfield outsider Pangrazio getting the biggest thrill Friday night with his latest high-dollar stock car win at Land of Legends.

“We’ve done pretty well with this car this year,” understated Pangrazio, 36, after picking up the biggest payday of the season, $1,000, with lap bonuses tacking on another couple hundred in the 25-minute workout. In his only other appearance steering the red no. 7 T&D Investments-Royal T Trucking-CRS Ford Mustang, he collected $500 after winning the mid-week Ontario County Fair Championship in July. “We went with a hard compound tire so the longer the race the better we ran and all those green flag laps really helped.”

Reduced in distance from 75 to 50 laps due to driver concerns regarding fuel consumption, five caution periods slowed the first half of the feature. Widowed wife Debbie Whyte unfurled the initial green to send off the field following a “missing man” formation pace lap in honor of 1999 Canandaigua Pro Stock points champ Les, yet only two laps were scored before the yellow flag flew for the first time.

LOLR regular Quinn Sutherland took the early lead chased by weekly rival Jimmy Grant with Marc Minutolo and sixth-starting Pangrazio in tow. The pink no. 29K mount of Chris Cunningham looped in turn one to incur the initial yellow, and with cautions counting up to lap 35, Pangrazio blasted from third to first on the ensuing lap seven restart.

Minor spins by Damian Long, Ryan Rozelle and Cunningham forced out three more yellow flags while a turn four tangle on a lap 11 restart was the most dramatic of the night. A quick video replay revealed how Grant got turned around from behind by Bob Buono leaving Jason Quigley little room to operate as he piled in.

At the halfway mark Pangrazio faced little resistance, leaving Sutherland, Minutolo, Carl Cleveland and Jared Hill to thrash it out for runner-up recognition. Grant battled back into the top-five on lap 37 and with 10 to go his combat continued lap after lap with Cleveland and Hill.

In a sudden shake-up with the final order, Sutherland slid high up the track in turn two to relinquish second to Minutolo, and in the combined yellow/checkered flag finish Cleveland, Hill and Grant rounded out the revised front-five.

“Couldn’t do all this without the help from so many people,” added Pangrazio, after dominating for a half-track victory, his fourth career triumph in Canandaigua. “Its all about hooking up with the right people, and all my guys help put a helluva ride together for me.”

A staunch financial supporter of Bay and her ‘hotter-than-pink’ colored no. 48A Danny Willmes Enterprises-VanBortel Trucking-Ruggles World of Auto Body/Eagle sprint car, Alysha dedicated her second career CRSA 305 tour win to Danny Willmes, who passed away from medical complications early in the week.

“Can’t thank Danny enough for all that he’s done for our teams over the years, this one goes out to him,” said a somber Bay despite registering her third Mike Emhof Motorsports 305 Sprint win of the ’19 campaign in Canandaigua. A brighter spot was an early $750 birthday gift as the gal from nearby Gorham turns 26 tomorrow.

“Its been a tough week, my only thoughts tonight were going out and having fun. Wasn’t worried about points the last couple shows and we’ve really run well. Hit our marks and stayed consistent most of the laps. We’ll just go into tomorrow with an open mind and whatever happens, keep it fun,” added Alysha, who ranks third all-time at LOLR with 10 career 305 wins.

Front row partners Dan Bennett and Jerry Sehn Jr. paced the 17-car field with Bay filing in third on the starting grid. She slid under Sehn for second on lap seven followed soonafter by David Ferguson, then disposed of Bennett running her preferred low line as the leaders rounded turn four to complete lap 11.

With the caution-free finale finished in less than six minutes, Bay sprinted away for a solid 12 car-length victory, followed by Bennett, Ferguson, Johnny Kolosek and downstate driver Tyler Jashembowski.

Saturday is expected to be quite the showdown as Chuck Hebing (1 win), Paulie Colagiovanni (2) and Davie Franek (1) top the LOLR 360 Sprint Classic Series point standings, with defending mini-tour champion Hebing yet to finish outside the Top-5 in the first four main events.

DIRTcar Sportsman action fills out the tripleheader with $1,500 up for grabs in the 50-lap headline event. Gates swing open at 4 p.m., grandstand seating starts at 5 o’clock and racing follows hot laps at 7. The adult grandstand general admission ticket price on Saturday is $29, seniors are $27 and kids 16 & under are $5 with those under 5 let in free. The pit fee is $45.

Mark your calendar as the 2019 season-finale arrives in three more weeks when the Phelps Cement Products Gerald Haers Memorial takes center stage at the fairgrounds. The lucrative $45,000 DIRTcar ‘Build Your Bank’ Challenge for both DIRTcar Big-Block Modifieds and DIRTcar 358-Modifieds is set for Sat., Sept. 28.

The 50-lap Modified feature winner will collect $6,000 from the $35,950 purse, with no less than 20 of his closest challengers expected to collect over $1,000 in this truly ‘Saturday Spectacular’ intended to pay every driver entered.

A DIRTcar Sportsman Series fall event adds another $7,500 to the record single-day payout in Canandaigua, with $2,000 collected by the winner of the 40-lap feature that guarantees $125 to start.

As the 56th season comes to a close, check out the final point standings for all four weekly divisions and keep up with all the late breaking news online by visiting www.LandOfLegendsRaceway.com. Advance sale tickets for the remaining shows are also available for purchase online throughout the final weeks. Log into the website (LandOfLegendsRaceway.com), hit the red “Buy Tickets” button on the homepage, then make a selection from the list of dates & events highlighted.