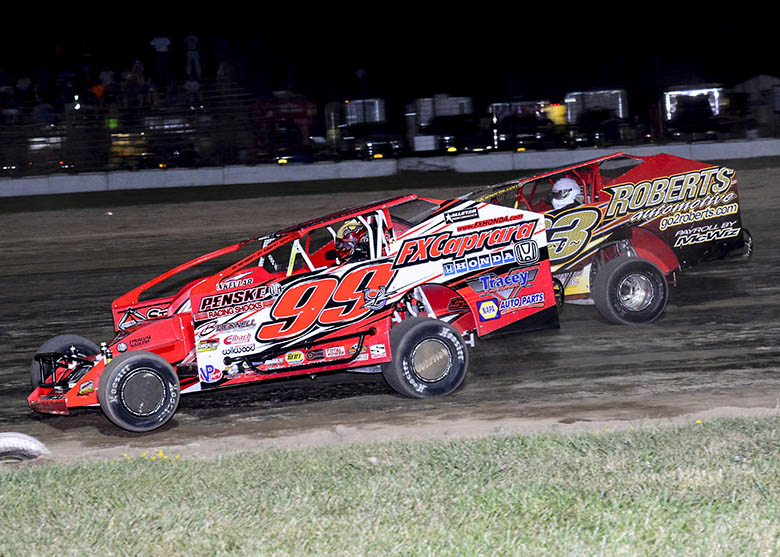 Larry Wight returned to victory lane at Land Of Legends Raceway. So did Matt Guererri. And so did hundreds of rabid race fans as revolving restrictions put in place at race tracks since April due to the coronavirus were loosened just in time for the first full month of summer to begin.

The ‘Thursday Spectacular’ on July 2 was just that as an excellent crowd turned out considering the on-going pandemic, and a pits full of open-wheel racers responded with another action-packed show at the storied Ontario County Fairgrounds oval.

Openly choked up by the support shown on both sides of the fence, LOLR Promoter Paul Cole kicked off the program by thanking those fans in attendance for their patience and told them to get ready for some ‘throttle therapy’ before the roar from revving engines brought the crowd to its feet in anticipation of the first green flag.

The racers did the rest as Wight made a daring move to wrestle the lead from Erick Rudolph en route to a convincing 35-lap Pepsi Big-Block Modified win and Guererri staved off every challenge thrown his way from weekly rival Kevin Root to triumph in the caution-riddled 25-lap Speed Connection Sportsman finale.

“Having Erick start up front like that, he was able to get that early jump,” remarked Wight, now with four checkered flags in six attempts this year in Canandaigua. Until 2020, his only victory came three years ago in an Empire Super Sprint A-Main.

“I tried pulling a slider on him that one time and thought there was a little bit more cushion to hold me but there wasn’t anything to hold that right rear (tire) so I stood off. But I was able to chase him down. Think I was a little bit better to keep it tighter to the bottom in turns three and four, and all it took was that one time when he slipped up,” noted Wight from Phoenix NY, after collecting the $2,500 paycheck in front of a most appreciative crowd that until Thursday could only view his exploits on Land of Legends TV. Tonight seeing was certainly believing.

Rudolph (started 2nd) and Wight (3rd) surrounded pole-sitter Adam Roberts to kick off the feature after the Top-4 heat race qualifiers redrew for starting positions. The lead duo wasted little time pulling away from the remaining 23 cars, with Sportsman graduate Dave Marcuccilli, second-generation standout Kyle Coffey and Justin Haers filling out the front-five. The order stayed intact early on before Matt Farnham and Dillon Groover made their presence known in the first third of the race.

After reaching traffic on lap 10, the leaders continued to weave their way around the tricky half-miler running both inside and out. Wight finally slid under Rudolph for the first time low in turn one on lap 12 but Rudolph regained the top spot immediately after as Wight drifted high off the track in turn two to drop back almost a dozen car-lengths.

Undaunted by his initial attempt to move to the point, ‘Lightning Larry’ quickly regrouped and when Rudolph went slightly wide in turns three and four he suddenly bolted underneath to forge the lone lead change as the scoreboard flashed 20 laps complete. Despite Ryan Susice —making a rare appearance in Wally Wade’s no. 82 Bicknell machine— losing power at the end of the front chute three laps later to incur a brief second caution period, Wight was able to build a comfortable advantage of more than 2.0-sec. back under green.

Haers was the biggest benefactor on the final lap 23 restart as he blasted from fifth to third passing both Marcuccilli and Coffey in the dash. As the laps dwindled, the leaders once again stretched their advantage while Farnham and Groover continued to battle for Top-5 spots. At the wire, Rudolph was able to close within three car-lengths as Haers settled for third ahead of Marcuccilli and Farnham.

While crossing the scales just two pounds over the 2500 minimum after last week’s caution-infested affair, there were no sour grapes in wine country on Thursday as his potent #99L FX Caprara Honda-Tracey Road Equipment/Bicknell entry weighed 2550 in the customary post-race procedure.

“I saw Kevin (Root) try to make it work up there high in three and four in the Sportsman race before I got in the car for our feature,” Wight said. “Thought he was gonna make something work up high so I went up there and tried it but by the time we got out here there wasn’t enough brown to hold the car.”

“I saw Erick hit that hole and he slid up so I had enough traction to gas it up and get it in there. Don’t think we’ve ever been able to go away from our hometrack and have this kind of a streak, so hopefully we can keep it rolling here. Have to thank everybody for supporting us in this crazy time, especially my mom and dad for everything they do for the sport,” added Wight, appropriately acknowledging his parents John & Laura Wight, owners of both Brewerton and Fulton speedways.

With show-up points on the line for both divisions in the holiday special, the fireworks started early during the 25-lap Sportsman finale. After last Saturday’s 30-lap DIRTcar Series feature ran off caution-free, four yellows and a red flag slowed the action even before the halfway mark.

“Don’t think I’ve ever been happier to see fans out here, these last six weeks sucked without them here,” beamed Guererri, from Waterloo, on the heals of a division-high third triumph of 2020 after going winless all last season. “To see all the people back in the stands is awesome. Gave me goosebumps just hearing the ‘start your engines’ command and having the crowd get into it. I missed that.”

Paced by pole winner Guererri, the 31-car field took chief starter Scott Hixson’s opening green flag yet early contact sent Frank Guererri Jr. off the track high in turn two before a single lap could be scored. Two laps later hard luck driver Garrison Krentz got airborne exiting the second corner before getting tapped from behind and collecting Torrey Stoughtenger in the aftermath. And in just two more laps, the red lights were turned on after a turn one tangle left Rick Martin resting battered on his side with Ryan Dolbear sitting wedged in between as Ray Bliss, Andrew Jacobson and Stoughtenger waited for assistance from the safety crew.

The field realigned for a lap five restart with Guererri and Root racing ahead of Kevin Ridley, Mike Fowler and Zach Sobotka in his quest for a third consecutive checkered flag at LOLR. Two more caution flags flew for minor mishaps and at the midway point 15th starting Kane Bristol cracked the Top-5 for the first time, disposing of Fowler on lap 17 to set his sights on the trio of Guererri, Root and Ridley.

Full-fledge Sportsman rookie Sam Hoxie spun alone between turns three and four to force out the fifth and final yellow with five laps still to go.

Shadowing leader Guererri most of the way at the same time deflecting constant bids by Ridley, reigning track points king Root finally dove under for the lead on lap 21 when Guererri got caught high rounding turns three and four. Failing to let off the gas pedal entering the first corner, Guererri blasted high in turns one and two before switching back low in three and four to regain the top spot the next time around.

“My car just didn’t really want to go anywhere, it was just so tight,” said Guererri, now with nine career Sportsman victories at LOLR since 2015. “I felt better at the top in one and two, figured if anybody was gonna pass me they’d have to go underneath because I wasn’t that good down there.”

“Turns three and four, I didn’t even know where else to try and run. Then I saw (Root) stick his nose down there and he drove by going into one. Figured if I got a run off two I would need to get back to the bottom in three and four. This car has been super good. Got a lot of good people behind me but we’ve all got heavy hearts with Andy passing away. Its a huge loss for the racing sport,” added Guererri, reflecting on the recent death of Andy Phelps, father of veteran Big-Block racer Jimmy Phelps, who finished 13th on Thursday night.

In pre-race ceremonies a moment of silence was paid in memory of Central New York patriarch Phelps, a former driver, mechanic and long-time car owner. His first Late Model stock car carried the #99 which remained a constant in the family with brother Roger and then son Jimmy showcasing it in the Modified ranks in the late 1980s, 90s and into the newest millennium.

With the purchase of Weedsport Speedway in 2013 by Al Heinke, Andy was also named managing partner for the track, overseeing much of the day-to-day and race day operation of the track.

Special thanks to group leader Rodney Dutton in attendance Thursday spearheading involvement by the Disabled American Veterans Chapter #4 out of Canandaigua, this week’s 50/50 raffle drawing beneficiary. A link to the Facebook page is https://www.facebook.com/Disabled-American-Veterans-Canandaigua-Ch4-564548433615701/

LEGEND LEDGER
Land Of Legends Raceway staff and racers take off the Fourth of July holiday before the fairgrounds returns to action July 11. The mighty Pepsi Modifieds headline the first ‘Saturday Spectacular’ of the month in Canandaigua and are joined by a full card of Speed Connection Sportsman, MEM 305 Sprint, Street Stock and Hobby Stock racing with qualifiers going green at 7:00pm.

Double points are on the line in all five weekly divisions for the Mid-Season Championships slated for July 18 while the Big-Block Modified Super DIRTcar Series takes center stage Wed. July 22 for the ‘Liberty 100’ along with a second division to be determined.

Grandstand attendance will continue to be permitted as fans are required to follow the Centers for Disease Control & Prevention(CDC) guidelines for social distancing that are currently in place. Facial coverings must be worn when an individual can not maintain 6′ social distancing (i.e. in line at concessions, restroom, etc.) although they are not required for anyone holding a medical exemption. Be respectful and please do not attend any racing event if not feeling well.

LIVE video coverage remains available for all events on www.landoflegendstv.com for those fans choosing to enjoy the show from their own home. Get your Land of Legends race day pass today by downloading the LOLR mobile app.

As the 57th season of motorsports continues to unfold, be sure to follow the point standings and breaking news online by visiting www.LandOfLegendsRaceway.com. To discuss marketing opportunities available at the track in 2020, please contact LOLR GM Greg Emerson via e-mail gemerson@landoflegendsraceway.com.