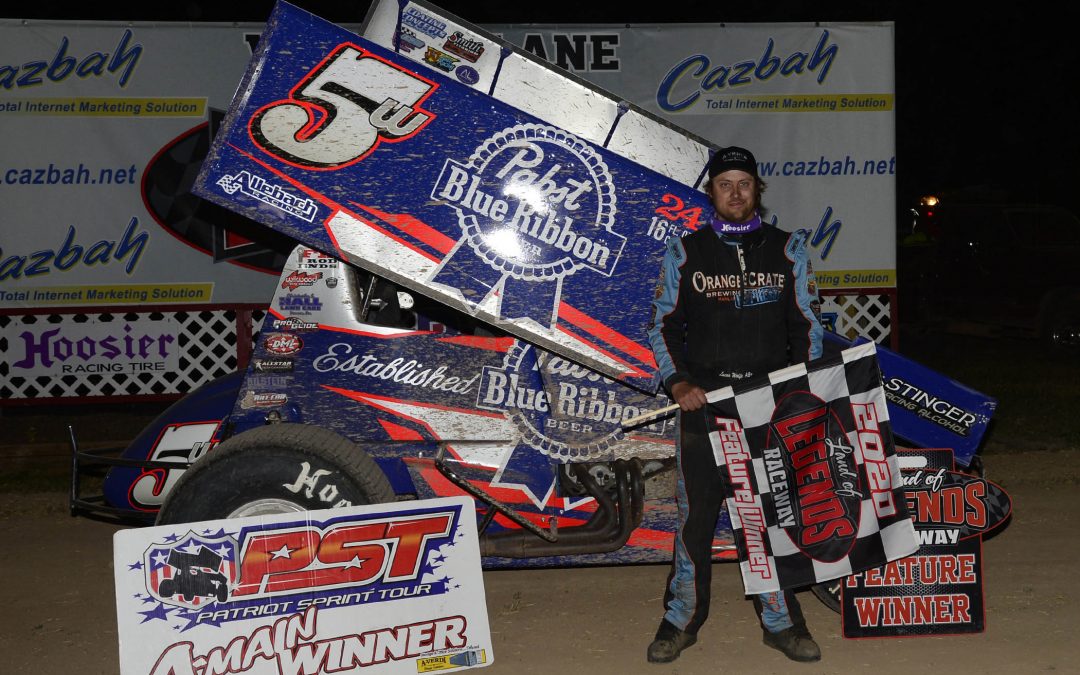 The second-generation standout from Mechanicsburg collected $2,000 for his initial triumph at the Ontario County Fairgrounds in the winged Wednesday Night Spectacular presented by SuperGen Products, also Wolfe’s inaugural checkered flag in PST competition.

“Kind of struggled early, wasn’t able to see where the car was right, just had to wait to get the wing back a little bit,” remarked Wolfe, 33, the 2008 World of Outlaws Sprint Car Series Rookie of the Year, who garnered his lone WoO win in 2012. Wolfe finished 16th in the last WoO Sprint Series race staged at Canandaigua in 2009, although his father, Randy, competed six times placing 7th in both 1983 & ’84.

“Ultimately I got a break on the restart, kinda left the top open which gave me enough speed. The top was pretty good just after the restart then kind of slowed down. Was good for me to get in the dash, gave me some extra laps and got going better. Happy to run well here, hopefully this is a little start to some momentum for me. Personally, and with this car, just got to find a way to get better results more consistently, and this (win) will definitely help,” noted Wolfe, on the heels of his PST debut in wine country although he scored 7th-place in an Empire Super Sprint (ESS) A-Main in 2017.

After filing in ninth on the 25-car starting grid, Wolfe took advantage of a lap 18 restart to bolt from fifth to second, then swung high around Billy VanInwegen to forge the fourth and final lead change en route to a thrilling six car-length victory at the stripe.

“This (LOLR) and a lot of NYS tracks get real shiny and real slick but I think its good that way when they get cleaned off,” said Wolfe, who also owns wins across the state at nearby Outlaw Speedway in Dundee, Rolling Wheels Raceway in Elbridge and Orange County Fair Speedway in Middletown. Bloomington (Ind.) Speedway was the site of that memorable WoO victory eight years ago. “That was about as wide a track as you’re gonna get and I kinda got off the back stretch a couple times. At home the tracks generally stay a little more dirty and don’t get quite this shiny. These are challenging tracks to get a hold of and that’s one of the good things about the opportunity to come up here and run with both the Patriots and ESS, do different types of tracks and surfaces. Think its good to experience some of that,” Wolfe stated.

The A-Main provided a wild start as pole-sitter Jared Zimbardi suffered a broken drive link and his spinning #35 mount in turn one forced a mass scramble among the trailing pack. Joining Zimbardi pitside without a single lap completed were recent Big-Block Modified winner Larry Wight and Danny Varin while Jonathan Preston and Steve Glover were able to return following the red flag.

Also a Modified regular at LOLR this season, Matt Farnham moved to the point on the restart, able to hold back VanInwegen until lap nine when traffic changed the running order. Jordan Thomas incurred a second red flag on lap 10 when his #79 winged machine rolled upside down as the second-generation pilot navigated through turns one and two.

At the halfway mark, VanInwegen and Farnham continued to pace the field although two-time 2019 LOLR A-Main winner Paulie Colagiovanni was gaining on the lead duo. Colagiovanni ducked under Farnham in turn two to grab second on lap 14 then went around VanInwegen down the back chute on lap 16 to assume command.

The night suddenly came to an end for the reigning ESS points king as Colagiovanni clipped the infield uke tire entering turn one to limp around with a broken front end and VanInwegen was back out front when the green flag reappeared on lap 18.

“Felt pretty good on top during the last restart for a couple laps then it went away,” Wolfe added. Guys racing in turns one and two left the top open and I had a great run. First night out with a bit of a new design so we’re pretty happy with it. Still odd not racing in front of any fans in New York, hopefully things will get back to normal sooner that later.”

“In the beginning we were just a little too tight and making some mistakes for not being in the car. Once it got rolling seemed pretty good. Overall a good night to start off the season. Think another five laps might have been as good as Lucas there, just have to clean up those mistakes,” figured Tanner, who steered the 90 Rifenburg Contracting Corp.-Westward Painting Co.-Sykes Enterprises/Maxim.

Making his debut in a brand new Panther chassis for owner Mike VanDusen, third-place was hard to swallow for VanInwegen from Sparrowbush after dropping to third on the final scoresheet aboard the no. 56 Pro Fab Enterprises entry.

“Pretty heart-broken over that (finish), maybe had a bad MSD box, the car just broke up all over the race track at the end,” VanInwegen revealed. “Up to that point I think we had the car to beat. Just never know what can happen there. Our first night out and Mike gave me a great race car. Can’t wait to run some more events around here, confident we can do well.”

What may have amounted to a mini Speedweeks production for Sportsman, Guererri’s second victory of the 2020 Canandaigua campaign culminated a 12-day stretch that attracted more than 60 drivers contending in four events. A pair of victories, runner-up and third-place finishes for Gibbz are better than only defending track champion Kevin Root, who owns the other two trophies to go with two third-place tallies in the torrid June 6-17 stretch to kick off LOLR’s 57th season.

“Its a lot easier when you don’t have to catch him or pass him,” remarked Guererri, in reference to two-time overall DIRTcar Sportsman Series titlist Root, who remains among the biggest obstacles between the Waterloo driver and his first track points crown. “Its been great so far. We got a new car and updated a bunch of stuff.”

“Matt Sheppard (Big-Block Modified star) worked his tail off this winter helping me get this thing going. He spent a lot of time on my car instead of working on his own and he came tonight and helped me. Have to also thank everybody that comes out and supports us every week. This one’s for my mom, she’s home after surgery and would’ve loved to be here tonight,” Guererri said.

Unlike the ’20 lid-lifter when Guererri inherited the lead on the final lap after Root suffered a flat tire in traffic, Guererri led the entire distance after drawing the pole. Root still rallied to finish third on Wednesday after picking the worst number (9) in the pre-race draw.

At the drop of chief starter Scott Hixson’s initial green flag, Guererri jumped out to comfortable lead steering his potent #12G Tradition Automotive Group-Product 9-Mohawk Northeast/Bicknell machine. Rookie Emmett Waldron encountered a flat right-rear tire on lap 10 to force out a yellow flag and Guererri was back to ground one.

Meanwhile Root was making up ground quickly, moving past Ridley for fourth on lap 22 then swapping spots with Krentz the next time around. But in the end it was still Guererri by a dozen car-lengths, followed in order by Inman, Root, Krentz and Ridley, with Bristol and Payne settling in behind.

“Passed the first two lapped cars then I saw a big pack and thought ‘man, I’d take a yellow right now’ and got one,” added Guererri, with career Sportsman victory number eight now in the record book at Canandaigua. “Everything just went our way tonight.”

“I saw the #20 (on scoreboard) and thought it was Ridley, figured he was running around the top. So I tried the top in (turns) three and four and it was better so I’m glad I switched up at the end. The bottom was starting to get slick so it worked out when it counted,” Guererri said.

With the 57th season now officially underway, be sure to follow the point standings and breaking news online by visiting www.LandOfLegendsRaceway.com. To discuss marketing opportunities available at the track in 2020, please contact LOLR GM Greg Emerson via e-mail gemerson@landoflegendsraceway.com.