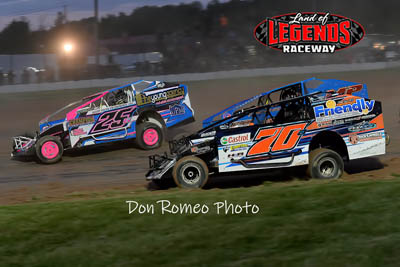 The youth of Land of Legends Raceway, continues to explode. Brother and sister Alex and Kennedy Payne will race the Pepsi big block Modifieds and Speed Connection Sportsman class in 2022, respectively.

The Payne name has been synonymous with the LoLR for quite some time.  Eldon Sr raced Streetstocks back in the day while Eldon Jr continues to campaign in the Big Blocks at both LoLr and Outlaw Speedway with some occasional traveling also.  Speed Connection, located in Canandaigua, is owned by Eldon Payne Jr, and sells race auto parts and has car sales as well.  Speed Connection is also a name well known here as they are the official class sponsor of the Sportsman division.

Alex, 16 years old, will be driving a 2022 Teo Chassis and will drive a full season of big block Modifieds this season here. While he had a hand full of big block starts in 2021, this will be officially his rookie year in the top ranked class.  He is the reigning American Racer Tire Sportsman champion at Outlaw Speedway with 11 feature victories. He also had a single victory at Land of Legends Raceway in 2021. Kennedy, 15 years old, has a 2013 Troyer Chassis and had 13 starts at Land of Legends Speed Connection Sportsman in 2021, running a full season schedule this season.

The brother and sister duo are very protective of each other.  They have a bond not only as siblings but also in their love for auto racing.  Usually where you see one, you will see the other.

The team has plenty of help in the garage. Eldon Payne Jr, their dad, Eldon Payne Sr, their grandfather. Also helping is Dan, Brandon, Ryan, Mark, Mike and Doug.

Eldon Jr feels that his offspring are ready for the 2022 season. “Both of them are good protectors of their equipment. They’re both way beyond their years when it comes to racing,” says Eldon.

Its safe to say the future of local auto racing and that of the Land of Legends Raceway is bright.  As the Youth movement continues, watch for these youngsters to be the future stars of the sport.