Successful On and Off the Track 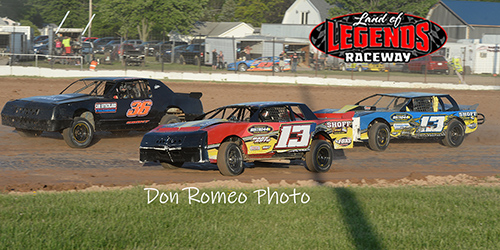 Brian Lloyd is one of many stock car drivers who has come out of retirement to begin racing once again. Brian will be in his third season after coming back in 2020. He ran in the early 2000’s, where he had his only career feature victory in the Land of Legends Raceway Pure Stock class.

Brian owns Lloyd’s Contracting whom is also the division sponsor of the track’s Hobby Stock class at Land of Legends Raceway. Lloyd’s Contracting was voted as the #1 Home Builder/Remodeler in the Fingerlakes in 2021. Somehow, Brian also found time to campaign weekly at two speedways. Brian was third in Hobby Stock points and had twelve top ten finishes. He was second in points at nearby Outlaw Speedway.

“My goal this season is to get some wins,” said Lloyd, 43. Brian lives in Branchport, NY but was brought up in Canandaigua.  Brian is further proof that you never lose that will to race.

“In 2019, I had the chance to race my cousin’s Pure Stock and after that, I got the bug to race again,” said Brian, who has owned Lloyds Contracting for four years and is experienced in residential drywall and metal stud framing.

“The one thing I’m happy about is all of the support I get behind this race team,” adds Lloyd as he prepares for the local 2022 season.  Lloyd officially kicked off the season with a trip south to race in Florida.

The help behind Brian in the garage and at the track is his wife, crew chief and biggest supporter Sarah along with Shane Lloyd, Caden Lloyd, Kyler Lloyd, Tony Garlock, Carter Bradley and Shane Wright.