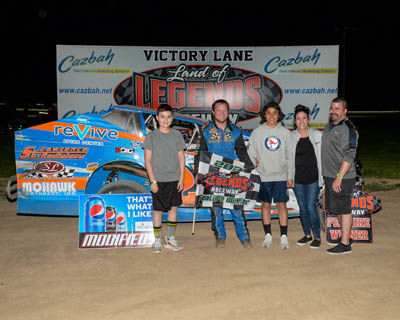 Erick Rudolph of Ransomville, NY is just 30 years old and has already accomplished so much in local short track competition. He is a multi-time track champion on both the dirt and asphalt in several different divisions, including the Land of Legends Raceway in 2018 aboard the Pepsi Big Block Modifieds. In 2021, he finished second in points, just two points behind champion Justin Haers, just short of what would’ve been his second straight championship here.

Erick was born into a racing family. His father was the 1986 Mr. DIRT Champion and several time track champion in the Western/Central New York region. His grandfather Jim was a top driver on both asphalt and dirt surfaces. One of Erick’s biggest accomplishments in stock car racing was a victory on the Syracuse mile in the Jipp Ortiz owned DIRT Sportsman in his first effort there.  To say it was a dominating performance would be putting it mildly.

Not only was Erick born into a racing family but he was also born in a town rich with racing history. Cutting his teeth on the little R at Ransomville Speedway, Erick would quickly move on to bigger and better things which would include a 358 Modified where he quickly became a hometown favorite.  Erick didnt disappoint his fans as he quickly racked up wins in the top class and continues to do so.

Charlie also had a short stint in NASCAR’S Cup Series in the 1970’s. He would retire from racing in 1995 just as Erick began racing go-karts, where he was a consistent winner, both outdoors and inside the walls of the Niagara Falls (NY) Convention Center. Erick still races Indoors in a Three-Quarter Midget during the winter months where he is a four-time champion.

Both Charlie and Jim are in the FORE Score Club Hall of Fame. Charlie is also in the DIRT Hall of Fame located in Weedsport NY. Erick is certainly to follow but has many years of racing ahead of him prior to that happening.