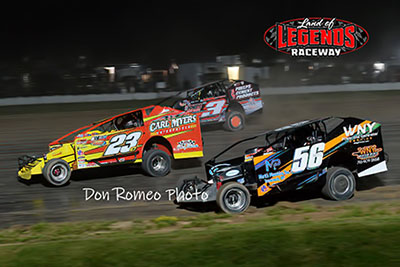 Garrison Krentz has driven nearly everything in short track dirt racing. He got his start at the tender age of seven years racing Flat Track Bikes.  From there, Garrison raced four wheelers and 600cc Street Bikes in Canada.

Krentz drove the DIRTcar Sportsman division for five seasons, starting in 2016, mainly at the Ransomville Speedway, the closest dirt track to his home.  In 2019, Garrison got the opportunity to move into the Pepsi Big Block ranks at the Land of Legends Raceway, where he currently runs today.

Krentz lives in Pendleton, NY which is in a region that is dominated by DIRTcar 358 Modifieds, but the opportunity to get a pair of big block motors came up, and that was the direction he eventually went.

Garrison started off the 2021 season well with a pair of top five finishes, then experienced engine problems. He ended the season with six top ten finishes in eleven starts. Garrison certainly caught the eyes of mainly big block fans as he dueled with some of Dirt’s best on a weekly basis.

“The 2021 season was an incredible experience and I learned a lot,” said Krentz. ”I feel that I’ve learned from it and am really looking forward to 2022.” With his mechanical woes behind him, look for Krentz to have a break-out season this year.

Garrison spent several years on the road following the Super DIRTcar Sportsman Series and is expected to run several Super DIRTCar big block Modified events in this upcoming season, two of those are scheduled at Land of Legends Raceway.