OVER THREE DECADES OF RACING AT THE LAND OF LEGENDS RACEWAY 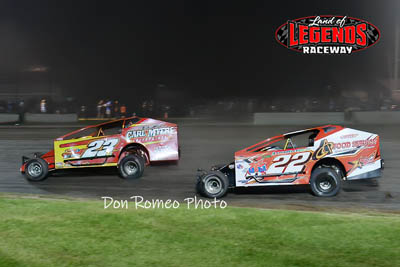 Gil Tegg of Rochester has had plenty of years on the half mile Land of Legends Raceway. In the 31 years he’s been at the Ontario County Fairgrounds, only a handful of other drivers have more seniority in the pit area than he does. Gil started racing in the old Rookie Street Stock division in the early 1990’s at the Canandaigua Speedway getting a couple of feature victories.

He spent one season in the Street Stocks before going into the Big block Modifieds. In his long racing career, he’s picked up eleven big block Modified and four 358 Modified feature victories. Put that in perspective, three decades of racing at the Land of Legends Raceway.  Gil is in a select group of racers who have consistently called the historical racetrack home.

Last season, Gil drove twice a week, in addition to the Land of Legends Raceway schedule he split time on Fridays between Ransomville Speedway and Brewerton Speedway.

In Tegg’s first season in the big block Modifieds he spent the first few weeks of the season at Fonda Speedway. While racing there he caught the eye of Modified legend Jack Johnson. He also picked up advice from former driver Dickie Larkin, especially for Syracuse.

“Both helped me so much,” said Tagg, “I needed so much help and they were there to advise me.”  Guiding the next generation is something Johnson, Larkin and many others did very well.

His father Gil Sr, Norm and Brian will once again be behind the scenes in the pit area and in the shop. Be sure to stop by and say hello.  Gil always has one of the nicest looking hot rods in the pit area.