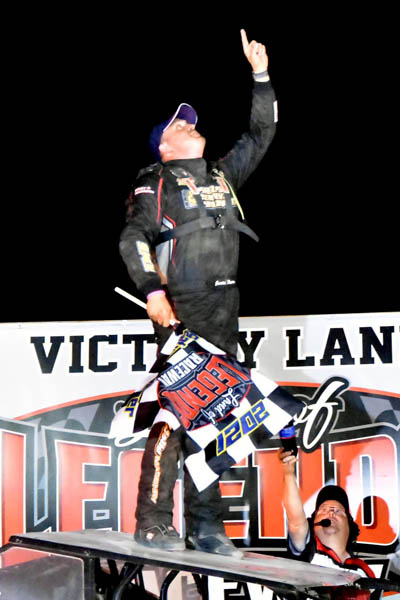 Justin Haers of Phelps, NY had what could be considered his best big block modified season to date in 2021. Haers, 42 years old, was the Pepsi big block Modified champion at Land of Legends Raceway for the first time in his short track racing career.

“It was a great season,” said Haers of his 2021 season at Land of Legends Raceway. “It was a season where we had few problems.” With consistency being key in short track racing, having few mechanical breakdowns is of vital importance when chasing a points championship.

Justin won three times on the half mile Ontario Fairgrounds oval. He also had twelve top five finishes and thirteen top ten finishes in fourteen starts. During his career, Haers has three second place points finishes here. In 2017, he tied with Matt Sheppard however the tie breaker went to Matt as he more feature wins.

One of the toughest things to do in racing is to repeat a championship. Especially with the outstanding field that the Land of Legends Raceway has. He finished two points better than Land of Legends 2018 big block Modified points champion Erick Rudolph. He was eleven points behind Rudolph going into the final points night.

The one event Justin looks forward to every year is the annual Gerald Haers Memorial weekend sponsored by Phelps Cement Products. The 4th annual event will take place on September 16-17, 2022. His father Gerald was his biggest fan. Pictured here is an emotional Justin following his first victory since his dads passing.

Justin started racing go-karts in 1980 as a twelve-year-old. Following that, he would experience asphalt Late Models, DIRTcar Sportsman, and DIRTcar 358 Modifieds before moving on to the DIRTcar Big Block Modifieds.

Justin would also like to thank his wife Melanie, mother Joanne, daughter Emma and son Jonathan for their support. Also his brother Jerry and nephew Jared.  Racing truly is a family affair for many within the sport. This is evident each Saturday night as Justin is surrounded by his.