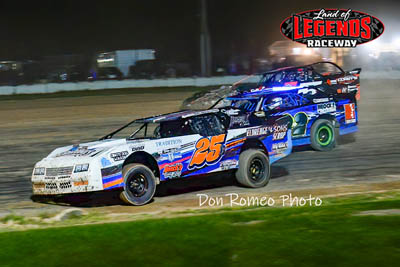 The Minutolo name is one that comes to mind when you think about full fender racing at the Land of Legends Raceway. Mike and Marc Minotolo are a father and son duo that have made victory lane a regular Saturday night stop for decades. Marc was one of two Land of Legends Raceway competitors who drove in two different divisions in 2021, the other being Jamie Eldredge Jr.

Minotolo was third in the Eldredge & Sons Scrap Street Stocks points and finished third in the Lloyds Contracting Hobby Stocks in the 2021 season. It was Marc’s first time in which he drove full time in two separate divisions at the Land of Legends Raceway.

“It was a lot of work,” said Marc in a phone interview. “Especially when you drive weekly at two different tracks, but it was a lot of fun.”

Marc also campaigned weekly at nearby Outlaw Speedway on Fridays, where he won the track’s Hobby Stock championship, grabbing nine feature wins. He also added a feature victory at Fulton Speedway. While he failed to pick up a victory at Land of Legends, he had twelve top ten finishes in each of the Street Stocks and the Hobby Stocks.

The 2021 season is where he was able to turn things around after suffering through mechanical problems in the previous few seasons.

Minotolo is 30 years old and lives in Newark, NY, began his racing career when he was 15 years of age in the Pure Stock class. His father Mike also spent several years in the class. In his first year 2007, Marc won his first championship at Land of Legends. He has three other Pure Stock titles here in 2011, 2013 and 2016. There are currently no plans to move up a level, but will drive in both classes for the 2022 season again.

His dad Mike is the team’s crew chief. Marc also credits a selected number of friends with his racing success.