Back to Back Titles In The Speed Connection Sportsman 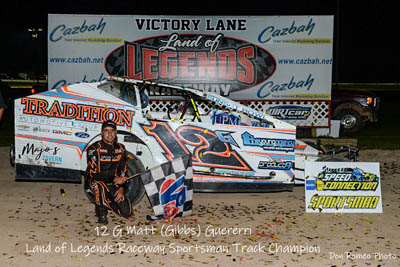 “It’s been a great feeling,” said Matt in a recent phone interview of his racing success. “This division is so tough.  There are so many quality drivers, getting wins is a challenge.”

Matt has been behind the wheel of his own race car for the past ten years. Back in 2011, he took his brother Nick’s Sportsman out onto the track at the Land of Legends Raceway and nearby Paradise Speedway.  Getting the racing itch, Matt hit the track with his own race team in 2012.

Matt is 32 years of age and is planning on returning to the Speed Connection Sportsman division in the 2022 season, but would love a chance to compete in the Land of Legends Raceway Pepsi big block Modified class in the future. However, like many other drivers in his position, it all comes down to financing the program.  Matt ran just a selected number of Super DIRTcar Sportsman Series events in 2021.

“I’ve had to commit myself to this new Graphics business I started this year, ImageX,” adds Guererri. “I’ve worked in graphics for several years and decided I wanted to go out on my own,” continued Guererri. “It takes time and commitment, similar to racing, to make it successful.”  When he’s not busy with his business and his own race car at the local tracks, he can be seen working behind the scenes with eight-time DIRTcar big block Modified champion Matt Sheppard.  Matt credits both Matt Sheppard and Randy Kisacky for their help with his racing effort.

In addition to ImageX, Matt has sponsorship help from Tradition Chevy, Mohawk Northeast and Waterloo Container. Behind the scenes, he has Kierstan and Bethann helping both with the business and his race team.  Matt pilots a Bicknell chassis powered by 602 crate engine.