A LOOK BACK AT PETER BRITTEN’S 2021 SEASON 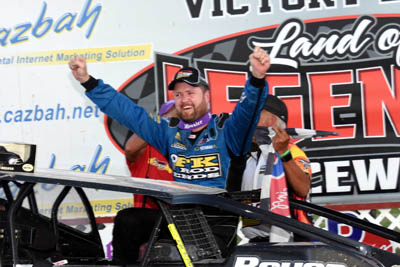 After a successful racing career in his home country Australia, Peter came into the northeastern DIRTcar Modified theatre in 2009 starting with the weekly racing programs here. Two years following that, he started running the Super DIRTcar Modified Series full time. While in Australia, he was a three-time National Modified champion.

Unfortunately for Peter, he hasn’t had the chance to go back home to return to his racing roots, due to Covid. His brother Kevin has taken over his championship winning ways with five straight National Modified championships.

Peter changed his racing program prior to the start of the 2021 season, when he decided to make Land of Legends Raceway Park his permanent Saturday night home. Piloting his Bicknell chassis powered by a Billy the Kid powerplant, he was third in big block Modified points here, and picked up three victories along with 13 top 10 finishes. One of those victories was a Super DIRTcar Modified Series victory at Land of Legends in August, it was a popular victory with the local race fans in attendance. It would be his second career SDS victory, he also has one at Sharon (OH) Speedway in 2017.

Peter started on the pole for the 2021 Billy Whittaker 200 at Oswego Speedway and 49th annual Super DIRT Week. Peter led the first 151 laps until an on-track incident, took him out of a chance of winning, he would end up 16th at the finish.  Peter would finish fourth in Super DIRT big block Modified Series points, with the one victory, along with 12 top 10 finishes. His best finish at Billy Whittaker 200 was a second-place finish to Matt Sheppard in 2017. He was also a winner in the 2018 Camping World 358 Modified SDS event at Oswego.

“We made the right move when we decided on Land of Legends on Saturdays and we had a good season here. The place has a great history and a great track surface,” said Pete as he recollected the 2021 season. “I thought we could’ve won a few more times. It’s a tough field to race against. I want to send a big thank you to Pepsi for coming on board and also to the entire LOLR staff.”