payne set for his rookies season in the pepsi big blocks 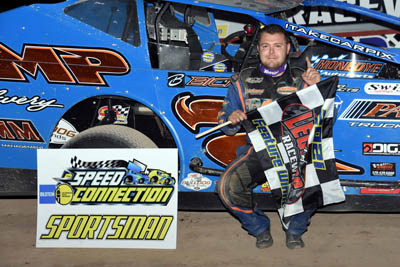 Zach Payne of Stanley, NY will start the 2022 season in the Pepsi Big Block Modified division after an excellant 2021 season where he finished second in points in the Land of Legends Raceway DIRTcar Speed Connection Sportsman points to Matt Guererri. Payne just completed his third season in the Speed Connection Sportsman class at LoLR where he enjoyed a pair of finishes in 2021. He also had fourteen top ten finishes here.

Payne was also succesful away from Land of Legends Raceway, also winning two Sportsman feature events at Weedsport Speedway and once at the DIRT Track at Charlotte. To say 2021 was a break out year for the 21 year old would be stating it mildly.

“It was a great season,” said Payne of his 2021 season. “I feel that I’m ready to move into the big block Modifieds.”

It will be a certain challenge for the 21 year old racing star with Land of Legends Raceway having an all star big block Modified field on a weekly basis. The likes of Peter Britten, Alan Johnson, Tim Fuller, and more plan on calling LoLR their Saturday night home once again this season. Sprinkle in visits by Matt Sheppard and rest of the talented field, Payne will have an opportunity to learn from some of the best.

“My goals this season are to be a consistant top five finisher and to get that first victory.”

Zach’s father Mike will continue to be his car owner and crew chief. He also credits his grandfather Hal and crew members Alan and Nicholas for the work they put into the car to get it race ready. Mike has competed himself behind the wheel and also has been a car owner for Superstar DIRTcar competitor Danny Johnson.