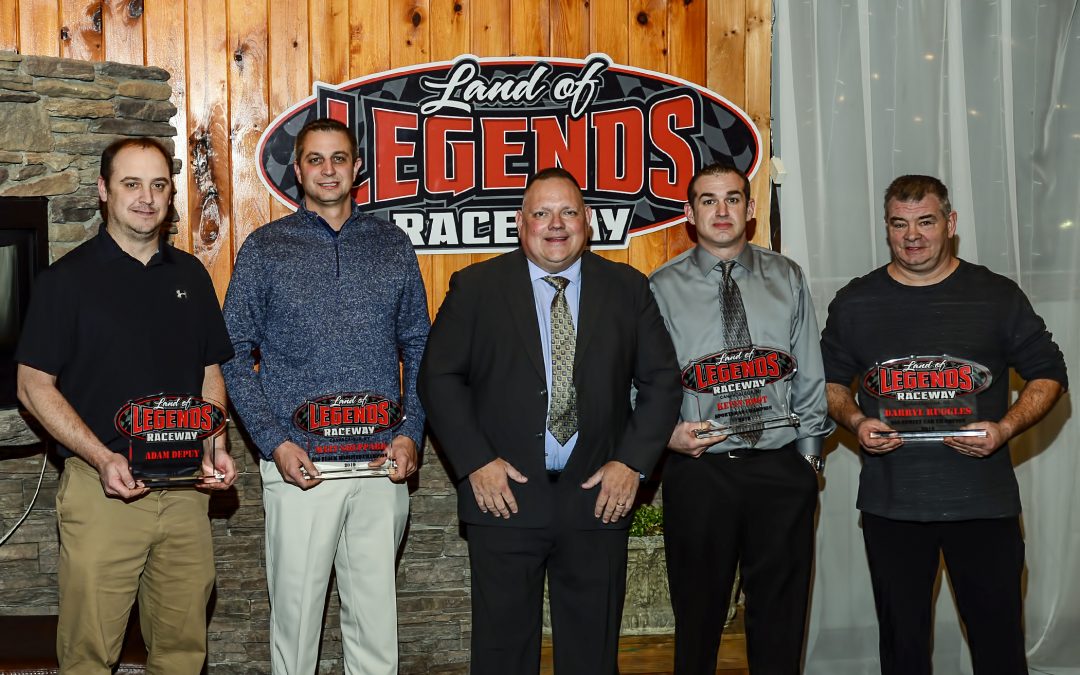 “It seems rather fitting that tonight we get hit with the first big snowfall of the year”
smiled Cole, 49, following a successful sophomore season spearheading speedway
activity that resulted in him being named DIRTcar Northeast Promoter of the Year.
“Weather proved to be our biggest competition every week last season, with eight
shows —including the two biggest events of the year— impacted or cancelled
altogether due to rain. But our team worked through a lot of unplanned issues and we’re
looking forward to a many more brighter days in the months ahead.”

In addition, recently crowned Empire Super Sprint and Patriot Sprint Tour champions
Paulie Colagiovanni (ESS) and Davie Franek (PST) scored A-Main victories at
Canandaigua on their way to first-ever titles for the respective sanctioning bodies.
Trophies were presented to the Top-3 point-getters in all four headline divisions, with 14
drivers in Big-Block and 22 in Sportsman plus Top-10 in 305 Sprint Car and Top-11 in
Street Stock classes receiving ample point fund checks. Sheppard pocketed $2,500 and
Root banked $2,000 from the lucrative season-ending $9,750 Big-Block and $9,850
Sportsman funds, while Ruggles ($700) topped the $4,325 305 Sprint pool and DePuy
($900) headed the $5,400 Street Stock payout.

“Fans and racers have a lot of choices when it comes to what track to support so we&#39;re
doing our best to make Land of Legends their top pick,” noted Cole, who remains a big
advocate of local charities as he continued to earmark proceeds from the weekly 50/50
trackside drawings to numerous non-profit entities. While enhanced lighting, new
scoreboard and videoboard, timing loop and sound system were some of the most
noticeable fairgrounds upgrades his first two years, expect more improvements to the
legendary facility as Cole continues his tenure.

“Just finished working out a 3-year deal with the Ontario Co. Fairboard to extend the
track lease through 2021 with an option to renew in 2022. And along with a brand-new
in-house web streaming service lined up when the new season begins, we&#39;re nearing
completion of a “Land of Legends” app. On race day fans and racers can check on the
weather and once at the track those in the stands and pits will have immediate access
to starting line-ups, race results and updated points as soon as they are tabulated. We’ll
have a lot to offer those in attendance on both sides of the fence and we feel we’rejust
getting started with all we can do to upgrade the facility,” added Cole,

Grabbing the attention of the party house contingent throughout the presentations,
customized video/slide show clips of each points champion produced by emcee Ovens
and the award-winning FLX Media Group (Mel &amp; Matt Thomas, Art Rorick) were
projected onto a large screen for all to enjoy and reminisce.

In 2020, LOLR management is excited to provide an in-house video streaming service
that will link with Victor, N.Y.-based web designer Cazbah through a brand-new site.
Full-year season subscriptions are available right now for $150 ($7.50 per show for

current 20-race schedule) if purchased by April 1 while weekly subscriptions will be
provided during the season at the price of general admission for that night.
This streaming video service includes viewing of every 2020 LOLR on-track event with
full-season and weekly subscribers having access to video archives plus exclusive
subscriber-only video content not found anywhere else. More details on the naming and
registration information for this new service is coming in the weeks ahead.

For the 19 th time in the past 20 years, the Big-Block title chase has ended the same way
… a Waterloo driver claiming the championship in the final points tally. And for nine of
those seasons its been Sheppard taking top billing, his most recent title registered last
summer in another career year running up and down the entire east coast.

“Its hard to thank enough all those that have supported our teams during the year as we
traveled around quite a bit and needed a lot of help along the way,” said Sheppard, 37,
now with 78 career Big-Block wins (5 th all-time) in Canandaigua to elevate his career
total to 371. His latest domination of the fairgrounds half-miler aboard the potent #9s
Hurlock Auto & Speed-Dendis Companies/Bicknell entry produced 8 wins and 12 top-5
feature finishes in 12 starts.

“I can remember sitting in the stands watching Alan (Johnson), Steve (Paine) and Bob
(McCreadie), racing was all I wanted to do so winning a track championship never even
crossed my mind. Canandaigua has been very good to me. I’ve been at the track pretty
much my whole life and feel very comfortable here. Have to thank Paul (Cole) for
continuing to give me a place to call home,” added Sheppard, who at age 17 took his
first checkered flag at Canandaigua in 1999 contending in the Sportsman division.

Last calling Canandaigua home on Saturdays during the summer in 2016, Root
returned to familiar grounds improving from 8 th -place in the final Sportsman
standings three years ago to top of the chart with a division-best four victories to
close out the decade.

“I’ve said it before, the toughest competition week in and week out is right here at the
Land of Legends,” beamed Root, now 41, with 12 year-old son Nicholas a familiar
site by his side in victory lane and Saturday at the season-ending awards reception.
“A lot of guys can win any night, we’re fortunate to come out ahead this time but it
wasn’t by luck. We’ve got a solid team and being able to back up what we did last
year means a lot.”

Since scoring his first win at LOLR in 2016, Root improved his career count in Ontario
County to six in 2019 steering the #34 F.X. Caprara Car Co.-Slack Karts-SJP/Bicknell
mount. Those four wins came in 14 starts with seven more Top-5 feature finishes
logged along the way.

“We took a big race at Middletown (Orange County Fair Speedway) that paid more
but winning the Haers Memorial at Canandaigua meant so much more. The Haers

family is family to a lot of racers around here and being able to win one for Jerry is
tough to match,” Root stated.

A long-time supporter of Land of Legends, Jerry Haers passed away at age 74 on
July 15 this past summer. A special trackside tribute for his lifetime of contributions
made to the racing community was conducted prior to the 2019 season-finale in
September.

Despite not matching his eight win mark of a year ago, Ruggles overcame a summer of
mechanical setbacks to sew up a third straight MEM 305 Sprint Car track title at the ripe
young age of 54. The Hopewell hotshoe remains atop the LOLR all-time sprint car win
list with 38 following his maiden voyage to victory lane in 2013.

An even bigger hurdle for Team Ruggles to overcome during the season was the
terminal illness revealed by long-time sponsor Danny Willmes, who ultimately passed
away on Sept. 2 at age 66. Ruggles mirrored his emotional victory lane appearance in
August with even fewer words upon accepting track champion accolades on Saturday,
just moments after viewing video footage showcasing his successful season with
Willmes always looking on.

On the heels of recording three wins and 10 Top-5 A-Main finishes in all 15 events, the
#48jr. Willmes Enterprises-VanBortel Trucking-Ruggles World of Auto Body/Eagle entry
will be back in search of a sixth career sprint crown in Canandaigua. After settling for
second behind Jeff Trombley his first time out, Ruggles also looks to improve one
position on the CRSA tour during the coming year.

While all three open-wheel champions expect to return to LOLR in 2020 to defend
their titles, recently anointed Street Stock points king DePuy has no intentions of
earning a fourth straight track trophy. Currently ranking 2 nd all-time with 46 career
full-fender wins at Canandaigua, DePuy modestly thanked his crew, fans, family and
friends, divulging to Ovens that he&#39;s taking the year off.

“I might make a race or two but my focus in 2020 is on buying a house in Fairport,
after that who knows,” offered DePuy, 45, who opened the 2019 Canandaigua
campaign on fire, collecting six straight checkered flags on his way to a personal
season-high total of nine feature wins.

The second half of the summer resulted in three more visits to the winner&#39;s circle,
and by season’s end his black #99 Ifreeze Storage & Dist. Center-A.E.Y.
Enterprises-Fox’s Auto-Quigley Flooring Chevrolet Camaro netted 11 Top-5 finishes
in 13 starts.

For the second straight year Ontario, N.Y. veteran Chuck Hebing topped the points
chart as he captured the Land of Legends Raceway 360 Sprint Classic Series.
Culminating with the New York Nationals 360 Sprint Car Championship in
September, over 60 wingmen from around the Northeast competed in the five-race

stint though none were more consistent than the #45 Wilkins RV-Cobra
Motorcoaches and Homes/X-1 sprinter.

Thanks to PJC Motorsports, the Land of Legends Raceway 360 Sprint Classic
Series point fund has already been boosted to $6,000 for the 2020 edition!
Opening up the Saturday evening program were a pair of special award
presentations, the first made by LOLR Race Director Greg Hixson to acknowledge
Paul Cole’s recent selection as DIRTcar Northeast’s top promoter, and the second
by Cole himself distinguishing LOLR General Manager Greg Emerson as the track’s
Employee of the Year.

As the awards portion of the progarm neared closure, Cole offered some final
congratulatory remarks while laying out preliminary plans for the 2020 race season
and outlining what both fans and racers can look forward to when the snow melts.
Dozens of door prizes were drawn during the banquet as Cole recognized many of
his staff members for their tireless efforts exhibited during the past season,
extending a sincere thank you; to all those that continue to serve the speedway.

Ransomville’s Rudolph went from Big-Block track champion to “Hard Luck;” award winner
at LOLR in the past 12 months. The young speedster was one lap away from
completing a late-race rally in July’s “Liberty 100” Super DIRTcar Series shootout when
his #25 reVive Spine Center-Blue Cross/Blue Shield-Mohawk NE-NMCC/Bicknell was
spun out by race-long leader Max McLaughlin to deny him valuable points and a $7,500
payday. Twenty-eight year-old “Erick The Great”settled for second in points, scoring 5
feature wins among 10 Top-5 finishes while leading 142 laps in 13 main events.

Making a fine first impression in his maiden voyage to the fairgrounds in 2019 behind
the wheel of the potent #36 Hands Performance &amp; Powder Coating-Champion
Scrap/Chevy Monte Carlo, Penn Yan’s Jimmy Grant (34 yrs.) was honored with receipt
of the 2 nd Annual Tim Downs Spirit of Racing award. Cole inaugurated the Spirit of
Racing trophy last January in memory of LOLR Sportsman driver and mechanic Downs,
who passed away unexpectedly at age 61 on Dec. 28, 2018 at his home in Bergen.
2020 Schedule

With 2019 officially in the record books for fans and racers alike, only three more
months await before Land of Legends Raceway launches its 57 th season. The storied
Ontario County oval comes to life for practice on Sat., April 18 before the 2020 lid-lifter
for the mighty Big-Block Modifieds, 305 Sprints, Street Stocks and Sportsman in the
“Cabin Fever 40” provide the first payouts on April 25.

The upcoming Spring/Summer slate is filled with a trio of Big-Block Super DIRTcar
Series shows (July 2, Aug. 13, Sept. 19) and two DIRTcar Sportsman Series events
(June 27, Sept. 19), along with Patriot (May 2, June 20) and ESS (July 2, Aug. 13)
specials plus CRSA 305 stops (May 16, July 18, Aug. 29). A new Hobby Stock class
makes its LOLR debut on May 2 and follows up with eight more appearances scheduled
on alternating weekends through the Sept. 19 season-finale.
LOLR Wall of Fame induction dates have been set for May 23, June 20, July 11 and

Be sure to join us every Saturday night this race season for a full show of open-wheel
Modified, winged Sprint Car and full-fender Stock Car action. Land of Legends Raceway
is located on County Road 10 at the Ontario County Fairgrounds, just 1-1/2-miles north
of Routes 5&amp;20, and is easily accessible from the NYS Thruway (I-90), taking Exit 43
(Manchester, Route 21 South) traveling from the east or Exit 44 (Farmington, Route 332
South) coming from the west.