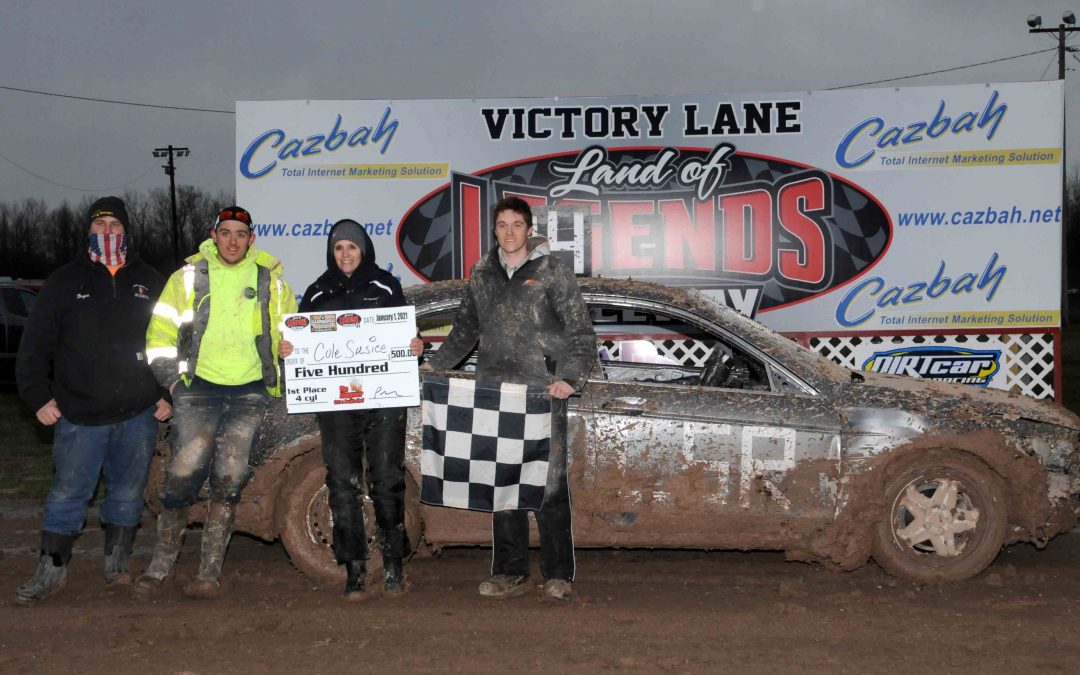 Billed as the ‘Hangover Gets A Double Shot’ presented by Eldredge & Sons Scrap Recycling in its 19th edition kicking off the new year, Ransomville brothers Austin and Cole Susice fittingly doubled up as they etched their names into the record book after capturing checkered flags Friday to unofficially uncork the 2021 motorsports campaign at Land Of Legends Raceway.

Austin dominated the 6-Cylinder field that turned out in full force and Cole topped a colossal 4-Cylinder class with the shortened twin 50-lap feature winners each pocketing a cool $500 for the day. Race runner-ups Jimmy Grant from Penn Yan/6-Cyl. and Taylor Partee from Seneca Falls/4-Cyl. each earned $250 from LOLR in ‘Memory of Dave Dandino’ while Dalton Martin from Scottsville/6-Cyl. and Darryl Ruggles from Hopewell/4-Cyl. took home $100 in Smith Bros. Drywall 3rd-place bonuses.

“This is a historic event and when the opportunity came to play host it was something we just couldn’t turn down,” stated LOLR promoter Paul Cole, now embarking on his fourth successive season promoting the hallowed Ontario Co. Fairgrounds half-miler. “We were fortunate to be able to fulfill it.”

“This wasn’t your typical event, no Big-Blocks or Sprints, no handicapping, qualifying or hot laps, just pure racing. It was like a rolling demolition derby. Too much action to watch, and almost too much for our TV crew to cover. There was always a lot going on, constant drama in every corner. Best of all, everybody had a lot of fun and that’s what racing should be about,” added Cole, who co-promoted the event with long-time racing publicist Tana Robinson.

“Paul actually inquired right after Utica-Rome held the event last January,” noted Robinson, who has reported on all but one ‘Hangover’ happening since Loren Fish —Friday’s grand marshal who waved the opening green flag— first presented the idea to the Friesen Family, long-time owners of Ransomville Speedway. “When the ongoing pandemic forced Utica to give up the 2021 date in November, Paul was all over it. He texted me right after and we started signing up cars ever since.”

Ed Lechner won the inaugural “Fish’s Automotive Hangover 100 Enduro” at the Big R in 2001 while local leadfoots Richard Conte (4-Cyl./50L), Kyle Richner (6-Cyl./50L), and Tyler Haniszewski (8-Cyl./50L) shared top honors in the extended ‘Hangover 150’ version in 2017 —- the final winter event run at the popular WNY facility that was twice postponed until on Feb. 4.

“Racing at Canandaigua has always been a big deal, really means something, truly a land of legends to both the racers and fans,” added Robinson, who spearheaded registration for Friday’s winter bash that totaled 183 entries come race day, joining Sheila Darcy, Toni Dillon and Nick Fultz in the scoring tower once chief starter Scott Hixson waved the first green flag. All-time LOLR Street Stock winner Mike Welch climbed out of the cockpit to head the track tech team. “Track ties with WNY teams have been super strong and all the excitement leading up to today helped produce a great turnout in just the first time here.”

The First of January dawned cloudy and cold with the sun playing peek-a-boo early on as temperatures hovered around the freezing mark. Racers from around the region flocked to the fairgrounds soon after as gates swung open at 8:00 am, anxiously firing up their full-fender machines for the highly-anticipated afternoon affair that marked the earliest stock car event scheduled in speedway history.

“The hardest part about getting around the track was all the mud,” remarked Austin Susice, 22, after helping author another chapter of legend lore in Canandaigua to springboard the 58th season of car racing in wine country. Adding to the family trophy mantle, Austin and Cole are cousins of 2009 LOLR Sportsman points champion Ryan Susice.

“The dead cars are not hard to get around, you just slide into them. Over there in turns one and two (mud) got real, real deep. You just had to keep your momentum or else you got it stuck,” Susice said.

Beginning sixth in the 67 car 6-Cylinder field lined-up in order of date registered, Susice charged past front-row partners Brandon Prentice and Rick Crego on the opening circuit to show his intentions early. Only Ricky Washburn and Kyle Wilkins could overtake the leader before Susice put his #6 Toyota Avalon out front for good by the lap 15 mark.

With the ultra-heavy track conditions plaguing racers from the start, the first of many fires during the day broke out under the hood of a mud-covered vehicle on the back straightaway to force out a red flag with 22 laps scored. Susice ran comfortably ahead with Hunter Phillips and James Sickles his closest challengers.

By the midway point only seven cars could muster up any movement as the remainder of the 60+ starting field sat stranded around the mud-bogged speedplant. LOLR regular Jimmy Grant was not one of those parked, looking to unlap himself after a quick tire change under red gave him new life and renewed hope to contend for the top prize.

A second stoppage for Eric Rowley’s burning mount on lap 39 once again froze the field, and back under green Susice retained the point ahead of Grant and Dalton Martin. Grant faded soon after the final restart and with finishing positions locked in, the race was checkered after 46 laps giving Susice his first Canandaigua triumph.

“Usually it’s balls to the wall on the gas and I destroy the car or blow it up,” confessed Susice, who was scored 5th at Utica-Rome last January. While COVID-19 shuttered his home track this past summer, he placed 18th in the final Sportsman point standings at Ransomville in 2019. “I took my time this time. Didn’t look at the lap counter until that last red and didn’t even think we were in the lead because this thing slowed way, way down at the end.”

“Have to thank everybody that helped out … Tyler, Timmy, and Mama Sue, and Triple T Auto Parts, without them I wouldn’t have any of these cars and we wouldn’t be here. Big thanks to Whitey for helping me strip down these cars, Danny Myrto for letting me mount tires, and K&G Graphics for all the artwork,” Susice added.

While attrition was high in the opening round 6-Cylinder shootout, the drop-out rate was magnified further in the 4-Cylinder finale that ultimately signed up 116 cars for the prescribed 25-mile main. And while the first segment was stopped four laps short, the 50-lap follow-up was consummately cut in half as the few cars that remained running could not improve their finishing positions.

“Pretty sweet to show up from just a couple hours away and take all their money,” beamed Cole, 20, who was declared the victor with 25 laps scored to join his older brother in a wet Canandaigua winner’s circle. “Soon as I found out I had a K (Series) here I knew I was gonna win it, can’t compete against one of these motors.”

Engine power had little relevance, however, as maneuvering around stalled cars and navigating through the quagmire proved most pivotal in the Friday free-for-all. Even pole-sitter and track veteran Darryl Ruggles’ #1 Nissan Sentra got stymied en route to taking the initial green flag, consequently stacking up the field in turn three to require the first red flag with barely a single lap scored.

The opening lap lead was credited to 17th-starting Justin Santoro yet Taylor Partee came from 31st in his #31 Chevrolet Cavalier to assume command following the lap one 20-min. delay. Head flagman Hixson was far from done, unfurling the cardinal cotton twice more, and with a dozen laps complete about a dozen cars from the original 110+ starting grid could be seen weaving their way across the marshland.

Despite his early issues trackside, Ruggles regrouped to grab the runner-up spot before a fourth red flag flew on lap 14 for a turn on fire. On the ensuing restart, Ruggles passed Partee entering turn two yet the 305 Sprint Car star could only hold the point for a moment as his ride suddenly came to stop exiting the second corner. But even that advantage was short-lived as Susice slid past Partee for the last lead change just two laps later.

With only a half-dozen machines still moving with 20 laps counted, Susice was miles ahead of the competition steering his #24 Honda Accord. Despite no chance of coming home first, Canandaigua’s own Ryan Cheasman was a show-stopper in the late stages, running backward for nearly two laps before coming to a halt as his #25 Chevy Malibu went up in smoke on the front chute to incur the final red flag.

Susice suddenly slowed to a stop in the turn three mud when the race resumed, leaving Dakota Longwell and Soapy Madia as the lone cars running with 25 laps scored. Yet with Longwell already down 16 laps and Madia close behind, when both cars lost power the race was deemed over and the name Susice echoed in victory lane once more. Partee and Ruggles came next, each settling in 11 laps behind.

“Thought I was done (when stuck in turn 3), had it in first gear and was hitting the shift for about a half-hour before they came and pushed me out,” explained Susice, after his team of Ransomville regulars got him back rolling just in time to greet announcer Steve Ovens at the finish line. “It was awesome, the first time I’ve been out to this track.”

“The hardest part was just trying to stay alive and not get stuck early. I was scared during a few of those reds but after you get moving you’re pretty good. Just tried not to get stuck. Always wanted to run my mini stock here, just brought this car out today to have some fun. Didn’t think I was gonna win it.”

“Have to thank my mom and dad, brother Austin and Brian … and that group of guys that helped push me out,” concluded Susice, who posted four wins on his way to the 2019 Ransomville Mini-Stock points title and confirmed he’ll be back when LOLR hosts a ‘full-fender frenzy’ on Sept. 11 that includes a return of the 4-Cylinder division. “I know Mike Kramarz was one of them. We’re all part of the same team.”

More than a half-dozen drivers collected additional contingency awards on the day:

LOLR returns to action in the springtime when the lone pre-season practice session for all divisions is held Sat., April 17. Highlighting the track’s 44th year flying the DIRTcar Racing banner, the official ‘season-opener’ finally arrives on Sat., Apr. 24 with 358-Modifieds and Sportsman in the ‘Cabin Fever 40’ taking center stage. The lead-off ‘Saturday Spectacular’ also includes qualifying and main events for 305 Sprints, Street Stocks and Hobby Stocks.