WHEN IT COMES TO SHORT TRACK RACING, FAMILIES ARE A TOP PRIORITY AT LAND OF LEGENDS RACEWAY 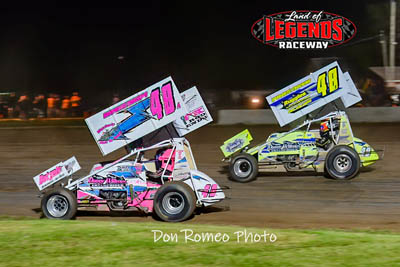 Darryl Ruggles has been racing here since the mid 1980’s when he was in weekly competition in an Ameuter Street Stock class. Following that he climbed the divisional ladder competing in the ProStocks Sportsman, and Big Blocks before moving to Sprint car action.  That is where Ruggles found his biggest success.  To say he is a natural behind the wheel of a sprint car is putting it mildly. Darryl has a total of 42 wins in the Mike Emhof Motorsports 305 Sprint division at the Land of Legends, the class he campaigns in weekly.  In addition, Darryl travels to select CRSA events and also some 360 sprint shows.

Darryl’s daughter, Alysha Bay, is the only female to ever win a championship at the Land of Legends Raceway. It came in 2020 aboard the Mike Emhof Motorsports 305 Sprints. Darryl will enter the 2022 season as the defending division champion. Alysha was credited with two victories in 2021 at Land of Legends and a single victory at Utica Rome Speedway.

Alysha has a four year old son, Logan, who will begin his racing career this summer at the Sodus Microd Club in the Microd class. Most kids are excited on Christmas morning.  For Logan, it was over the top when he seen his Microd.  The paint scheme mirrors that of his Papa and Mommy – one half the familiar 48jr and the other the familiar 48a.

Alysha was nine years old when she was a competitor in a local motocross group. Five years later she would begin racing 600 Micros. Alysha admits that when Logan gets more adjusted to racing she may cut back on her driving activities.

Darryl’s business Ruggles World Autobody and Alysha’s business Alysha’s Cut and Curl Salon, are both located in Canandaigua and both work out of the same building.

Both teams have plenty of help in the shop and at the track. Darryl’s wife and Alysha’s mom Wendy is the group’s biggest fan and works tirelessly helping wherever needed.  She also takes care of feeding the crew at each race event.  Brian S, Frank, Damian, Ike, Jeff and Brian M help make sure both cars are in excellent working condition.