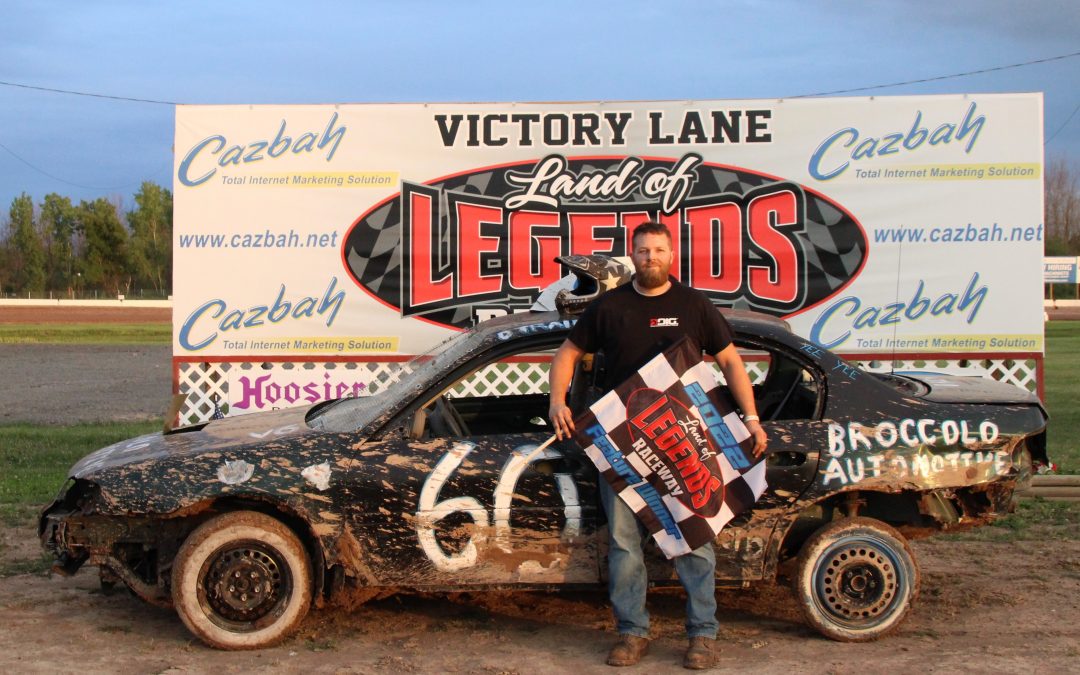 Teams off July 30 before CRSA returns to speedway for Aug. 6 ‘Saturday Sprint Spectacular’

Boasting a pair of $500 first-place prizes —2nd-$300, 3rd-$200— the twin 50-lap feature format attracted 81 amateur entries with Martin rallying from dead-last to best 29 other sixes while Mills led all but three circuits from his fifth starting position to outlast 50 full-fender foes comprising the field of fours.

“Just stayed out of trouble and took it easy the first couple laps when guys were beatin’ and bangin,’ noted Martin, a weekly contender in Land of Legends’ DIRTcar Sportsman class on Saturdays throughout the summer months. “Then just pretty much held it wide-open for however long at the end.”

Marc Minutolo became the third Canandaigua regular to gain command, taking the top spot on lap 11 to begin a back-and-forth battle out front. Minutolo slowed briefly on lap 22 to open the door for Dennis Thompson before the two swapped the lead twice more until Minutolo pulled to the infield for good on lap 24. In a three-wide maneuever out of turn two, Kyle Wilkins from Geneva took a short-lived lead on lap 28 as Martin made his presence known taking over the runner-up slot.

Martin forged what amounted to the final change on lap 30, although the new third-place car was none other than Justin Eldredge, who had stormed back through after losing three laps during the early pit stop. The top-three were all on the same straightaway with 20 to go, each looking for an open lane as slower traffic and parked cars provided non-stop suspense rounding all four corners of the track.

Eldredge went around Wilkins for second on lap 34 and chased down Martin as the pair ran bumper-to-bumper with a dozen laps to go. Eldredge was ready to regain the lead as he pulled alongside Martin down the back chute on lap 39, yet Justin suddenly dropped off the pace after a failing transmission ended the dramatic charge and any chance for a lifetime of fame at the Fair.

It only took a handful of laps for Martin to open up a comfortable straightaway advantage in the aftermath, although Eldredge hung on to finish second while Wilkins salvaged third-place at the line. Still looking for his first open-wheel win at LOLR, the second-generation wheelman from Scottsville now enters his name in the track recordbook for full-fender drivers at the hallowed half-miler.

“Kinda thought Eldredge was leading, figured we were second, at least third,” remarked Martin, who planned a possible return in the same car for the Ontario Co. Fair Demolition derby scheduled over the weekend. “He was the only one that had passed me once so I thought we were probably second.”

After a 45-minute break to re-water the track surface and clean up the muddied carnage from race one wreckage, fans returned to their grandstand seats as the 4-cylinder entries ventured trackside in round two fighting for fair honors.

Joining dad Shawn Mills inside row three to begin the second 25-mile main, Collin only ran second to his father laps 4-6 as the leadfoot from Windsor NY was the class of the field aboard the family’s yellow #9 Mills Logging Chevrolet Cavalier.

“Wanted to get the lead early … if you’re not first, you’re last,” exclaimed the triumphant Mills, who launched his Enduro career last October and now has almost a dozen events under his belt. “Only concern was a couple people that kept hitting me in the left rear. Track kinda got a little bumpy and thought I had a flat tire but I just rode it out.”

While the opening 6-Cylinder showdown ran without a hitch in 27 minutes, three red flags forced Mills to wait out his near flawless finish at the fairgrounds. A fire under the hood of Jim Eldridge’s Honda Civic required the first stoppage with 15 laps complete before Jason Begnouche’s Subaru Impreza came to stop sideways in turn four with the driver’s door facing oncoming traffic to incur the second shutdown on lap 35.

The third setback on the ensuing restart was easily the most thrilling as then race runner-up Raymond Jones caught the front wheel of his Chevrolet Cobalt down low between turns three and four then barrel-rolled multiple times across the track before ending up on all fours. In one of the quickest exits ever caught on video, Jones emerged unscathed as concerns for a fuel leak and the possibility of ignition promoted a breathtaking Houdini-like escape.

Back under green with less than 15 laps to go, Mills quickly built up a straightaway lead and with just five laps left the margin had ballooned to a half-track. When the checkered flag finally unfurled, Mills was the lone driver to complete all 50 laps with  Stanley’s Pat Kerrick credited with second and Clifton Springs chauffeur Jeff Landuyt scored in third.

LEGEND LEDGER
There will be no oval track racing on July 30 during the Ontario Co. Fair, with the next ‘Saturday Spectacular’ slated for Aug. 6 at Land Of Legends Raceway. Headlined by a return trip from the CRSA 305 Tour, the lead-off show in August presented by Auction Direct and DisBatch Brewing Company features a complete program of Pepsi Big-Block Modified, Speed Connection Sportsman, Eldredge & Sons Scrap Recycling Street Stock and Lloyd’s Contracting Hobby Stock racing plus MighTea Boba New Legends Sportsman action.

MIGHTEA BOBA & PEPSI POUR IT ON IN THE PLAZA
Even before the action heats up the track, fans will get a chance to get up close and personal with a talented trio of drivers and their cars while enjoying a tasty BBQ. When lunchtime arrives on Sat, Aug. 6, 11am-2pm, MighTea Boba and Pepsi will play host to a special meet & greet featuring guest wheelmen Peter Britten from Land of Legends headline Big-Block Modified class and Mike Welch and Parker Smith showcasing the Street Stock ranks. Pre-sale tickets for this afternoon event are $12.00 each and available for purchase from MighTea Boba, located next to TJ Maxx in Roseland Plaza on Routes 5 & 20, just minutes south of the track.

With the 59th season entering its stretch run, be sure to follow the point standings and breaking news online by visiting www.LandOfLegendsRaceway.com.

If you can’t make it out to the race track this season, LIVE video coverage of every event can still be enjoyed weekly through Land of Legends TV as for the first time ever all LIVE streaming will be offered FREE in 2021. On-line registration at  for a free account is the only step to take.

Also available for download is the LOLR mobile app found at Google Play
https://play.google.com/store/apps/details?id=com.goodbarber.landoflegends or
App Store
https://apps.apple.com/us/app/land-of-legends/id1508128970?uo=4 to secure your raceday pass today.
The weekly ticket prices in 2021 at LOLR remain $15 Adults, $13 Seniors, Kids under 16 FREE. For those youngsters needing pit access, Child Season Pit Passes are $30 for 2 & Under and $150 for kids 3-14. Camping is FREE at all race events. To purchase ticket and pit pass bundle packages in advance or discuss marketing opportunities still available at the track this season, please contact LOLR Marketing Director Tana Robinson via e-mail tana@landoflegendsraceway.com or cell 716-799-5669.

As the curtain drops on the 58th season of motorsports in Canandaigua over the coming weeks, be sure to check out the final point standings and breaking news online by visiting www.LandOfLegendsRaceway.com.

A complete card is on tap for the first of three ‘Saturday Spectaculars’ scheduled in September, with a Waterloo Softball Team Benefit raffle held during the event. Hot lap sessions kick off the show at 5:30pm and heat race qualifiers go green at 6:30pm. Pit gates open at 3:30pm and spectators gain admittance into the Ontario Co. Fairgrounds main grandstands at 5 o’clock.

FULL-FENDER FRENZY FILLS EARLY FALL CALENDAR
While the mighty Big-Block Modified, Sportsman and Sprint Car open-wheel teams will be away, the Sept. 11 slate remains jam-packed as Howell Properties, LLC presents ‘Full Fender Frenzy’ at the fairgrounds. Top area Street Stockers and Rush Late Model campaigners will be contending for $1,000 top prizes in their 30-lap main events while $750 is on the line for both Hobby Stock and 4-Cylinder winners.

Named in memory of past LOLR Pro Stock champion and driver of the sleek Top Gun #1 machine, reigning track points king Pangrazio will be out to score a third straight title race win in the 10th Les Whyte Top Gun Shootout for Street Stocks. WNY star Dave Schulz claimed the inaugural event in 1999.

On that historic day look for a special on-track tribute to area service men & women as well as our very own LOLR safety crew in a festive pre-race send-off. Fans are encouraged to wear red, white and blue in support and remembrance of those that were lost that tragic day 20 years ago.