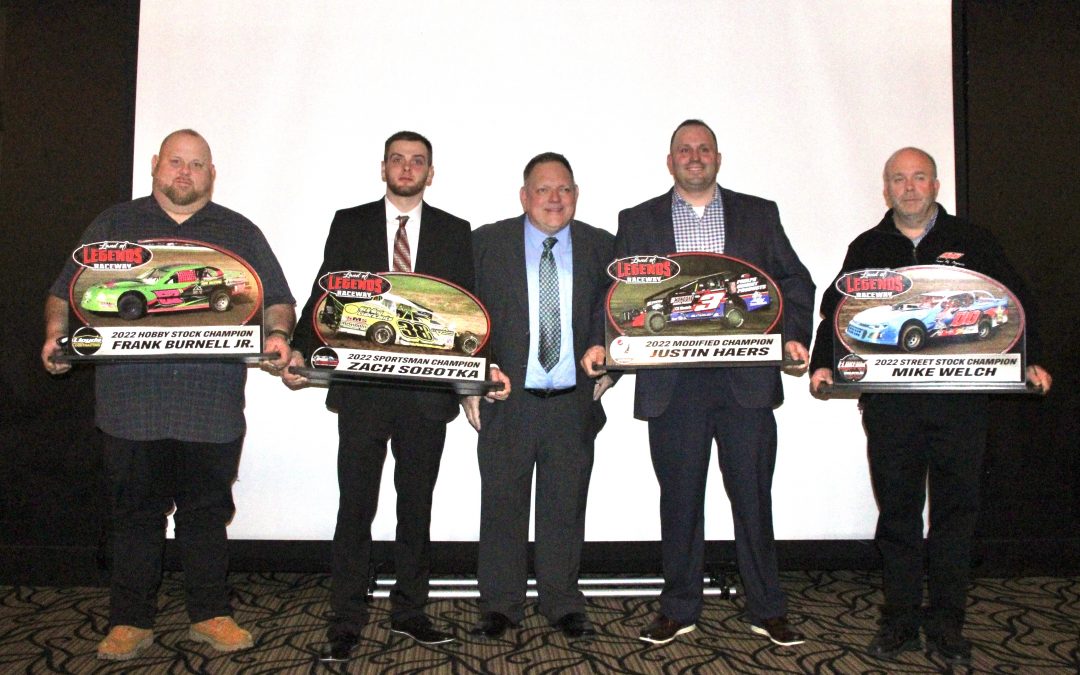 The 2019 DIRTcar Northeast Promoter of the Year opened the awards portion of the program with his annual “State of the Speedway” address. With plans for 2023 well underway, already there are some projects that have not been announced until the gathering on Friday night.

A large improvement to the facility is slated to take place in either March or April to replace a large section of general admission seating with the support of both a New York State grant and support from the Ontario County Fair Board. A section of grandstands formerly existing at Homestead-Miami Speedway will be constructed from the opening of the grandstands near the concession stand, extending down toward the officials tower.

Another project that in the works is adding some VIP suites to the Turn 1 area of the frontstretch after demand was so high for nightly sponsors in both 2021 and ’22. The pit area grandstands had new boards installed over the past season with many more replacements planned for the general admission seating area for 2023.

Cole addressed Land of Legends TV, which exploded in popularity in 2022 by continuing the free streaming video model put into place just prior to the 2021 season. LOLR TV will continue to be free in 2023 and Cole stressed the importance of teams using this as a tool to attract sponsorship to improve their team for the upcoming season. Cole offered both himself and Ovens as a resource to help teams with any questions on how to use the track’s streaming service to their advantage.

When addressing the 2023 schedule, Cole confirmed that the upcoming year’s agenda will focus exclusively on the divisions that race weekly at the Ontario Co. Fairground facility which was vocally met very positively by those in attendance. Traveling series dates have been adjusted to hold events with increased purses for Saturday Night Spectaculars as well as yearly stops by the Super DIRTcar Series, DIRTcar Sportsman Series, CRSA Sprints and the newly formed Empire Street Stock Series.

Cole confirmed that prices for both the pits and admission will not be increasing for 2023. Pits will remain $40, while General Admission will remain at $15, $13 for Seniors and Kids under 16 free of charge.

While 249 drivers, owners, crew members, track officials, corporate partners, family and friends of racing enjoyed dinner and cocktails at the popular party house in Geneva, NY, it was Haers taking home the lion’s share of the point fund cash and contingencies that rewarded 66 drivers in both open-wheel and full-fender competition during the 2022 season. Top drivers were recognized for their accomplishments with personal interviews and high-speed video highlights further enhancing the annual event for all in attendance.

With dozens of door prizes distributed throughout the evening, trophies were presented to the Top-3 point-getters in all five headline divisions. A newly designed champions trophy was presented this season that included a neon red lighted ring surrounding the outside of the trophy.

Emerging as the first back-to-back track champion since Sheppard 2011-2017, the beloved driver known as “T-Bone” graciously accepted his hardware and point fund with his son joining him at the podium. It was a bittersweet celebration for Haers as his daughter Emma was forced to miss the banquet due to illness, with her father noting he has pressure to win again in 2023 so she can finally attend a championship celebration. It was in fact the first championship celebration that Haers had attended as he and family missed out last year due to COVID-19 quarantine.

Sobotka celebrated his first Land of Legends track title in a season where tragedy struck the Sobotka family business and race shop due to fire in February of ’22. The team was able to salvage a pristine race car that was safely stored in the team’s hauler, but most of their shop contents went up in flames in what was a complete loss. Sobotka publicly thanked everyone who offered support at the Motorsports Expo and privately thanked fellow competitor Nick Guererri who arranged a Bicknell Chassis raffle which Sobotka said is what got them to the track at all this past season.

Guererri plans to step away from racing to spend time with family and was interviewed while picking up his point fund award. The pilot of the No. 25G was thanked for his weekly support on the track and in recent years for everything he has provided off the track for others within the Land of Legends community.

Sharing the spotlight with his driver on this festive occasion was Mike Sobotka, winner of the 2022 “Crew Chief/Team of the Year” award for Sobotka Racing.

“The Motorized Madman” Ruggles has been showing his stuff for years, now completing his tenth season to be exact, and in that same time frame capturing a division-best 47 A-Mains while garnering his division-leading seven track championships. Ruggles has had some off-season struggles, suffering a freak accident at his shop and spending time in a Rochester hospital recovering from both an eye injury and brain bleed per the family’s posts to their fans on social media.

Ruggles was on vacation in Florida during the banquet, leaving daughter Alysha Bay to accept the championship awards on his behalf. Bay spoke with track staffer Doug Elkins earlier in the evening to provide the update that her father’s recovery is coming along with a lot of adjustment. He has been able to drive and hasn’t ruled out a return to racing although those decisions will be made down the road with family.

Welch etched himself in the history books that already have his name logged with a record 86 career Street Stock feature wins. Welch now can claim 11 track titles ranging from 2003 through 2022. It was the first time Welch has worn the full-fender crown since 2015 and is the fourth different driver to claim the title in as many years.

Burnell took advantage of early season dominator Wayne Ellison calling it quits mid-way through the 2022 campaign to claim his second overall championship at the Land of Legends. It was a true Burnell bookend as son Tyler claimed the 2020 title followed by Justin Eldredge in ’21.

“Bubba” teased his son Tyler who took home second-place honors, though Tyler was able to claim bragging rights with 2 victories versus 1 for his dad. It appears that the Burnell team is gearing up to go after another 1-2 finish in 2023.

Cole closed out the program with an emotional presentation of his annual ‘Employee Of The Year’ award, this year handed out to Pit Stewards Tommy Curtis and the late Mike Scoppo. Curtis has been a staple in the Canandaigua pit area for decades and has become the face every racer sees first on their way into the track.

The same could be said of Scoppo, whose passion for racing was palpable as he met racers and crew members on his four-wheeled machine. Scoppo had fought and beat cancer on several occasions in recent years, in fact receiving a very positive report just days before his unexpected passing. The community lost Scoppo while spending time at his Florida home with wife Cathy, who joined the banquet via FaceTime to see her late husband receive his very deserved recognition.

Cole reiterated that there will be a special race paying $4,000-to-win for the Pepsi Big Block Modifieds on June 3, in what has been dubbed the “Scoppo Special”.

Fan-favorite driver Peter Britten was the reluctant recipient of the annual ‘Hard Luck’ award after a season where bad luck struck three times in big moments, preventing Britten from having a closer chance at an elusive track title. He also suffered a flat tire while in the mix for the coveted Gerald Haers Memorial crown in mid-September. Britten was a great sport about the award and the ensuing video package that was displayed, to the roar of the large crowd assembled.

A pair of ‘Best Appearing Car’ awards were handed out to open-wheel drivers Tony Velez from Gorham from the Speed Connection Sportsman division and Kennedy Payne from Canandaigua in the MighTea Boba New Legends Sportsman. The Velez no. 21V was designed and wrapped by ImageX Graphics of Waterloo, NY. Payne’s #31K car was designed by her brother and Big Block Modified driver Alex Payne (Speed Style Graphics) and printed by Wicked Tees of Horseheads, NY.

Former driver turned car owner and racing shock proprietor as well as local business owner Mike Payne from Stanley was honored with receipt of the 4th Annual Spirit of Racing award. Payne was recognized for the support he provides drivers throughout the pit area as well as his willingness to step in to help others in their time of need.

70th ANNIVERSARY CELEBRATION HIGHLIGHTS 2023 RACE SEASON
With oval track racing chronicled at the Ontario County fairgrounds nearly every year since 1953, the “70th Anniversary” season of motorsports at Land Of Legends Raceway leads off with ‘open’ practice sessions on Sat. April 15. Any type of race car is welcome for this kick-off event with grandstand seating offered free of charge.

The 2023 lid-lifter follows on Sat. April 22 with a $3,000-to-win main on tap for the mighty Pepsi Big-Block Modifieds along with a four-star show for Auto Value Parts Stores Sportsman, MighTea Boba 305 Sprint, Eldredge & Sons Scrap Recycling Street Stock and Lloyd’s Contracting Hobby Stock classes. Pit gates swing open at 4pm, grandstands at 5 o’clock, hot laps at 5:30pm and racing at 6:30pm. Grandstand Admission is $15 for adults and $13 for senior citizens while those 16 yrs. & under are FREE. Pit admission for all ages is $40.