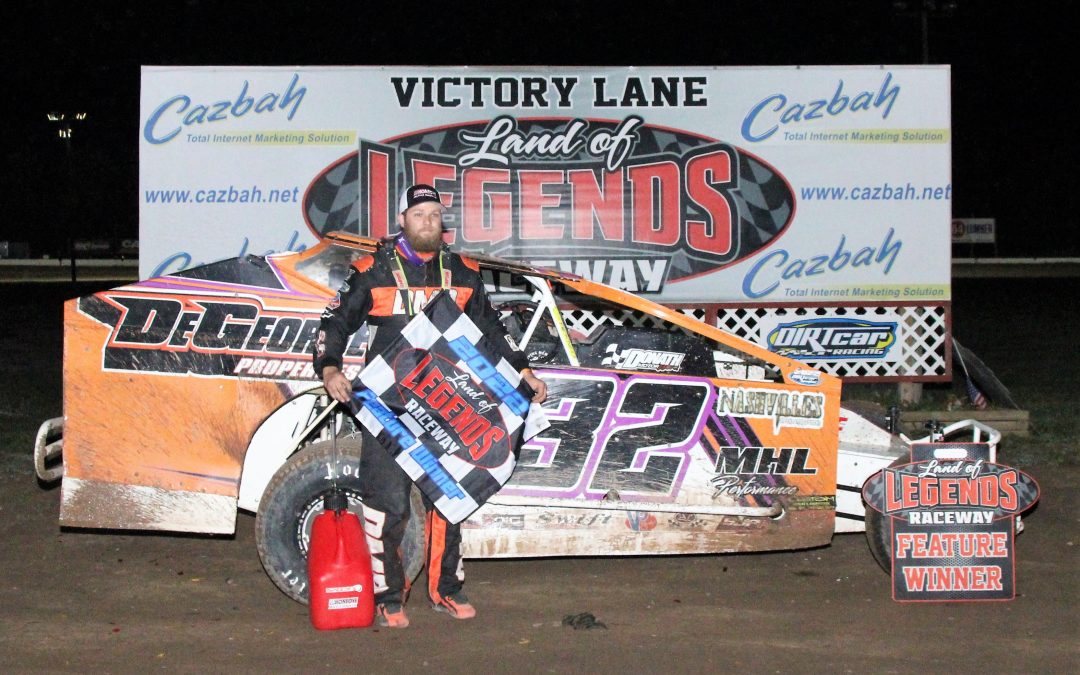 After drawing #1 for both 75-lappers at Brewerton Speedway (Tue) and Canandaigua, ‘Super Matt’ was supersonic from the opening green on Thursday, surviving a half-dozen restarts before pulling away from Vermont hotshoe Adam Pierson for the decisive straightaway victory wheeling the potent #9s Hurlock Auto & Speed-Westmoreland Golf Glub-St. Lawrence Radiology/Bicknell entry.

“Two good draws in a row, two great race tracks that I’ve got an awful lot of laps around and we got the job done,” remarked Sheppard, 40, the winningest driver in the Northeast now with 29 checkered flags in 2022, two coming at LOLR. “My dad had a (VIP tower) booth here tonight with a lot of family and friends, what an awesome win.”

Joining the second ‘Thursday Super Spectacular’ of the season in Canandaigua, Dalton Martin claimed the companion 25-lap Stirling Lubricants Gerald Haers Memorial qualifier for Speed Connection Sportsman. While Martin matched Sheppard by leading flag-to-flag, the long-awaited victory was in complete contrast to the multi-time Modified victor as it was his first-ever Sportsman feature race win at the historic Ontario Co. Fairgrounds oval.

The son of LOLR 305 Sprint Car racer Dan Craun, Caden cashed in his own piggy bank savings over the winter hoping to help those kids who everyday fight the battle against many forms of Pediatric Cancer. Dan was so moved by the selfless act shown by Caden, himself a quarter-midget racer, that he decided to add the Pediatric Cancer Awareness logo to his #18C 305 Sprinter this season with all his cash earnings going to a larger Golisano Center donation to help any child in need.

A brief mid-afternoon downpour delayed the evening activity yet that only seemed to wet Sheppard’s appetite as the Waterloo warrior made quick work of a stacked 39-car Big-Block field, topping his group two time trial session then devouring the remaining 25 qualifiers come feature time.

On paper it would appear no cake walk for any contender as 25 of the top-30 in SDS points signed in with 17 drivers accounting for 365 Big-Block feature wins at the fabled fairgrounds half-miler. But reality set in soonafter when the 30-mile main ended and Sheppard had banked another $7,500 for his fifth tour win of the season.

His red & yellow Bicknell mount adorned with #39 on this night in memory of the late Carl Myers, regular Canandaigua campaigner Kyle Coffey from Caledonia opened the card by copping his first-ever $100 Billy Whittaker Cars & Trux Fast Time Award in My Place Hotels trials after a one-lap clocking of 17.676sec. (101.833 mph).

At age 82, Carl passed on August 15. In 2008 he was inducted into the Northeast Dirt Modified Hall of Fame after the Sweeteners Plus Team won several Championships including Mr. DIRT Modified in 1999 (Big-Block) and 2000 (Small-Block) with Danny Johnson buckled in as well as the Super DIRT Week Big-Block title race in 2002 and ’07 with step-son Vic Coffey behind the wheel.

On Thursday, grandson Kyle re-drew fourth among the top-12 heat finishers while SDS points leader Sheppard selected pole-position for the second straight night to guide the 26-car starting grid. From the outset it became a race for third as Sheppard and Pierson pulled away from the pack each time a caution flag flew and their closest challengers failed to keep pace back under green.

Coffey and top Canadian travelers Mat Williamson and Stewart Friesen stayed in the hunt early yet could not hold their ground as the laps clicked off. Friesen rolled as high as third with less than 20 to go while Williamson returned to the top-5 after dropping back as far as eighth prior to a lap 42 restart.

Positions behind the leaders continued to fluctuate at a rapid pace following a pair of mid-race yellows, suddenly showing Friesen in seventh with 15 to go and Williamson climbing to third with a dozen laps remaining. All the while 12th starting Jimmy Phelps methodically made his way forward, shadowing Williamson into fourth with 48 laps complete.

Sheppard and Pierson never flinched over the closing circuits to take the top-two spots under head flagman Dave Farney’s checkered, while Phelps slipped past Williamson with 10 to go leaving hometrack hopeful Coffey to settle for a solid front-five run in the end. Marc Johnson, Erick Rudolph, Friesen, Billy Decker and Larry Wight rounded out the Top-10 in the 40-minute main.

“I just felt like I could get good traction and a good run into one,” commented Sheppard as he continued to rack up the numbers in 20 years of Big-Block racing. The eight-time and reigning SDS points king brought his career series win total to 88 with a tour-best fifth victory in ’22. The Land of Legends has now staged 52 SDS shows and Sheppard has won seven times to give him 87 overall (4th all-time) at LOLR since 2003 when he was named DIRTcar Northeast Big-Block rookie of the year. “I really felt comfortable. This is a track I have a lot of experience at. Definitely the comfort level is there, the car felt good. We had a great starting spot and really everything went our way tonight.”

“I’m pretty much in shock right now, pretty awesome to get second to Sheppard,” remarked Pierson, who reached victory lane at LOLR in a 40-lap GRIT Sportsman race to kick off the 2016 season in Canandaigua on April 16. “Tried to follow him a little bit, follow his lines. He was still getting away from me but I didn’t care, its like a win to win. Easily the best race for me, hopefully we can keep it up.”

“It feels pretty good to run with all these guys,” Pierson added. “The track kind of favored us tonight. We drew good and time trialed good. Everything was just good tonight. Towards the end of the race (Sheppard) chose the outside because the middle groove was better. He could get a run off before the start and beat me at the end of the line and then could have his line. It worked out for me because I was running the bottom or middle of one and two so I could get a run in two and follow him again and it worked like that every time.”

Super DIRTcar Series SummerFAST ’22 opened Monday at Weedsport Speedway with the rescheduled Hall of Fame 100 and it was Phelps capturing the 100-lapper for his first points-paying Series win in almost three years. A seven-time feature winner at Canandaigua, the ‘Baldwinsville Bullet’ matched his third-place series best finish at the fairgrounds first posted in 2009 and then repeated in 2015.

“I thought once we got third we could (pass Pierson),” figured Phelps, driver of the familiar no. 98H J&B Installations-Mohawk Northeast-HBR/Bicknell ride. “I hoped we could but I wasn’t sure. He did a great job for his limited experience I can tell you that. I didn’t think we necessarily had a better race car than him, just didn’t know how much he had used up his tires. After the first restart I knew we might be able to run with him, but we weren’t going to go by him. At that point we just had to hold onto third.”

The 2022 Super DIRTcar Series returns to action in round #12 at Ransomville (NY) Speedway on Tue. Aug. 24 with another $7,500 winner’s share awaiting the top Big-Block traveling teams in the headline 75-lap ‘Summer Nationals’ main event. For a complete schedule and more race results log into www.superdirtcarseries.com.

On the heels of Sheppard’s superior performance in the lead-off Big-Block feature event, Martin was close to perfection in the 25-lap GHM finale sporting his own triple-digit orange #132 DeGeorge Properties-Nashville’s Catering-Broccolo Automotive/Bicknell machine.

The second-generation driver from Scottsville is quickly developing a liking to mid-week shows in Canandaigua after making his victory lane debut when Enduro stock cars took center stage on Wed. July 27 of the recent 179th Ontario County Fair and Martin captured the lead-off 6-Cylinder championship event.

“Its about time,” exclaimed Martin, after outlasting race runner-up Nick Guererri who fell four car-lengths short Thursday in his bid to steal away Martin’s landmark win. Nick’s brother Matt Guererri did grab the point from Martin last Saturday yet Dalton needed only five days to forgive and forget and rebound for the memorable victory.

“We’ve been coming here for a few years now and the Guererris  are some of the best in the business. I knew when Nick got under me he wasn’t going to drive through me and its a huge deal when you have somebody running behind that you can trust.”

The third Stirling Lubricants GHM Sportsman qualifier on Thursday attracted 32 quality teams requiring four qualifying heats and a pair of consolation rounds to determine the final 27-car starting grid. A re-draw among the Top-12 qualifiers pitted pole-sitter Nick Guererri and Martin on the front row to take the initial green.

Martin wasted little time jumping out front of Guererri yet the trailing pack was even less patient as a turn two pile-up on the opening circuit forced a complete restart. Without a single lap complete, Ken Welty, Austin Germinio, Richard Murtaugh, Teddy Clayton Jr. and Tyler Corcoran headed pitside and were done for the night.

Two more cautions for a slowing Justin Liechti on lap 13 and spinning Ed Lukas on lap 19 were all that could slow Martin, yet a stubborn Guererri left no room for error as the two Canandaigua chauffeurs stayed glued the remainder of the way.

“Last week was driver error, I lost it not running my normal high line so I learned from my mistake,” divulged Martin, who was joined in the winner’s circle by father Rick, himself a past competitor at Canandaigua. “Tonight I figured someone would have to go on the low side to get by me as that kinda cost us last week in the end.”

Along with Eisele, Murray and Coffey, the win for Martin locked him into the season-ending Stirling Lubricants Gerald Haers Memorial in September. Race winner Karl Comfort, Kane Bristol, Paul Guererri and Zach Sobotka earned the first four spots in April while winner Tyler Corcoran was joined by Justin Henderson, Nick Guererri and Andrew Buff in the June qualifier to guarantee themselves starting spots in the lucrative GHM Sportsman Classic 40.

The fourth Stirling Lubricants GHM Qualifier, rewarding four more drivers, is slated for Sept. 3 Championship Night when the 2022 LOLR Sportsman titlist will be crowned while the last two qualifying races lead off GHM weekend on Fri. Sept. 16 with 14 drivers adding their names to the 30-car starting field taking shape for the Sept. 17 finale.

With the 59th season nearing its end, be sure to follow the latest point standings and breaking news online by visiting www.LandOfLegendsRaceway.com.