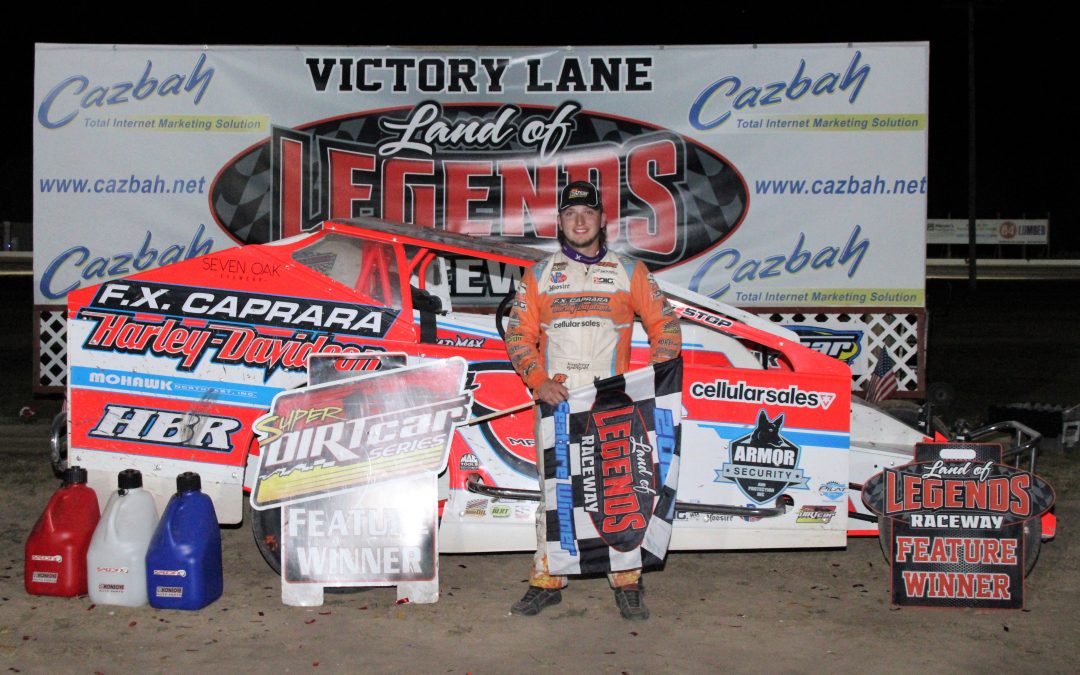 It was at the same Ontario County Fairgrounds oval in Canandaigua, NY that his father Mike McLaughlin logged his first-ever Pepsi Big-Block Modified victory on Aug. 25, 1979, while Max matched that feat in a Saturday show on July 17, 2018.

“Pretty cool that my dad won his first race here,” remarked McLaughlin, 22, whose father ‘Magic Shoes’ also took his 15th and final checkered flag at LOLR in August of 1981. Forty years later ‘Mad Max’ etches his name in racing lore both at the fairgrounds and on the Super DIRTcar Series, after becoming the 22nd SDS race winner at LOLR since 1976.

“We’ve been horrible the last couple weeks but never gave up, kept digging. All the guys in the shop worked their tails off, can’t say enough about them..”

Filling out the ‘Thursday Spectacular’ in front of a full house of eager race fans, Tyler Corcoran led all but the opening circuit to claim the companion 25-lap Northeast Series Central/West Region headliner for Speed Connection Sportsman.

Boasting 24 of the top-25 in SDS points and a host of hometrack favorites, a banner field of 43 Big-Block teams flocked to the fairgrounds for the mid-week series show. Veteran Pat Ward earned the $100 Fast Time Award in My Place Hotels trials after a one-lap clocking of 20.381sec. (88.318 mph) but unfortunately re-drew the highest number among the top-12 heat finishers. Reigning LOLR points king Justin Haers selected the pole while McLaughlin chose sixth on the 28-car starting grid.

As expected, Haers jumped out early at the drop of chief starter Scott Hixson’s initial green flag, jockeying with front row partner Adam Pierson as Tim Sears Jr., Jimmy Phelps and Phelps teammate McLaughlin were already mired in the mix. Current LOLR points leader Peter Britten cracked the front-five with 15 laps complete yet soonafter pulled his smoking #21A machine to the infield to put an abrupt end to the night.

Haers took advantage of the non-stop green flag racing with his closest challengers searching for the fastest way to catch him around the smooth half-miler. A third of the way through, Sears had settled into the runner-up slot with a torrid battle waged between Phelps, McLaughlin and 11th starting Matt Sheppard demanding the most attention.

McLaughlin finally grabbed third from Phelps on lap 34 and a half-dozen circuits later tracked down Sears to take over second. Meanwhile, Sheppard swept by Phelps on lap 37 while Erick Rudolph closed in on the top five just past the halfway point.

The first and only yellow flag finally flew on lap 46 when all-time Canandaigua winner Alan Johnson slowed with a flat right-rear tire. Haers’ seemingly comfortable lead suddenly evaporated with McLaughlin, Sears, Sheppard and Phelps now staring him down and Rudolph, Kyle Coffey and Stewart Friesen gaining a clearer line of sight to the leaders.

Rudolph disposed of Phelps then stole fourth from Sheppard after the ensuing restart before ‘Super Matt’ regained the position on lap 53. Two miles later it was Sears falling victim to a charging Sheppard, leaving only Haers and McLaughlin in the way of a seventh series win in Canandaigua.

McLaughlin had other ideas as the the laps clicked off, cutting the gap on Haers with the lead duo maneuvering through traffic at a methodical pace. Inching closer and closer to the finish, the HBR #8H F.X. Caprara Harley-Davidson-Armor Security-Cellular Sales-Mohawk Northeast/Bicknell entry finally pulled alongside the Haers #3 Phelps Cement mount as the pair exited turn two, forging the lone lead change with just four laps to go then holding on for a dramatic five car-length victory worth $7,600 and a place in the record book.

“When Matt first showed his nose I thought it was too late and he was gonna make a run,” recalled McLaughlin, describing his mid-race move to the front. “Then I got a real good run out of (turn) four. Saw Matt get a little high and I said ‘man, this is my time’ and I split him and Jimmy in turn one.”

“We had a really good race car. Can’t say enough about Justin Haers, he drove a helluva race and he’s one of my favorite guys in the pit area. He raced me clean and that was fun. Have to thank Al Heinke (owner) for giving me this opportunity to come back here and run,” added McLaughlin, who makes his home away from racing in Mooresville, NC.

Residing much closer to the track in nearby Phelps, a disheartened Haers still took solace in a superb second-place tally despite leading the initial 72 laps.

“What a shame, I really wanted to win this race but Max’s car was better than mine at the end,” stated Haers, still looking for his first feature win this season although standing second on the LOLR points chart just a single marker behind Britten. “I knew when we got into lapped traffic I was having some problems. They were maintaining with me if not getting away. I just got loose coming off turn two halfway through the race and it just kinda killed my drive off.”

“I was really good in three and four, just couldn’t get through one and two. But can’t hang your head with a second-place finish going against these guys. My crew worked their butts off preparing for this race and we were competitive all night, maybe needed a shorter race,” smiled Haers, who finished 19th and 6th when inclement weather helped dictate a twin 60-lap feature format last summer.

Sheppard placed 10th and 5th in the same doubleheader a year ago, yet took top prize in the SDS show held in September before finishing third on Thursday.

“Had a really good car, was able to overcome a bad draw and get up here on the podium which is still pretty good,” figured Sheppard, an eight-time Super DIRTcar Series champion as well as the winningest driver with nearly 80 tour triumphs. The Waterloo native won at LOLR in mid-May to give him 86 career Big-Block wins at the fairgrounds and rank fourth all-time.“All-and-all a good heat win and points night for us.”

“Was able to show Max my nose and unfortunately show him the line up top. Track was super tricky. Kinda ran the leaders down after that caution and thought I might have something for them but the car turned the other way on me. Poor draw but a good finish, we’ll take it and move on,” added Sheppard (822 pts), who moved ahead of McLaughlin (818) and Canadian star Mat Williamson (808) in the SDS standings after six extra-distance events.

The first of two Sportsman Series stops scheduled at the Land of Legends in ’22 attracted 38 teams on Thursday with open-wheel entries matching their Big-Block counterparts by running group time trials, four qualifying heats and a pair of consolation rounds to determine the final 30-car starting order.

Unlike last summer when Corcoran was fast all night steering his no. 64 Halmar Int’l-Power Seal-Dirt Track Digest/Bicknell mount to a second-best qualifying time, on this night the Central Square pilot was sixth quickest in his nine-car group. He regrouped just in time to finish third in his heat to earn an all-important re-drew spot for the 25-lap finale.

“Just like last night I sucked in time trials once again,” said Corcoran, 20, who finished 10th on Wednesday night in the Sportsman Series event staged at Can-Am Speedway in LaFargeville NY. Ironically, Can-Am’s 30-lap feature winner David Rogers placed 10th at LOLR on Thursday. “To put it in the re-draw was definitely the biggest thing on this track tonight. There’s really a stacked group of drivers here like the Guererri boys and (Joe) Sobotka. Hats off to Rich and Paul (Cole, LOLR promoter), this is a phenomenal race track, I could go anywhere with the lapped cars.”

Current LOLR points leader Nick Guererri out-sprinted pole-sitter Andrew Buff to lead the opening circuit before a multi-car tangle between turns one and two incurred a quick caution period the second time around. Ryan Dolbear and Ryan Barrett were able to rejoin the field although Chris Mackey was done for the night.

“Everybody jokes around about my left-front always being picked up in the air,” noted Corcoran, after becoming the first repeat winner in nine races at the fairgrounds in 2022. He also won the series stop at LOLR last August. “Could definitely feel that thing up there but that’s where I felt really glued no matter how hard I came into the corner. Man, this car was just unbelievable.”

“When the middle of turns one and two went away on me, kinda gotta a little concerned. I just tried to diamond off the bottom in three and four, show them my nose and hopefully run them clean and not scuff up anything,” Corcoran added.

Fresh off his first feature win in 10 seasons at LOLR, runner-up Henderson could only be satisfied settling for one spot below Saturday’s memorable outing.

“After the initial start then when we went to the restart he was gone,” said Henderson, following a second successive solid run against some of the best in the business. “We had a great car but just didn’t have anything for him tonight. We have a great crew, some phenomenal sponsors and my dad a multi-time track champ wrenching on the car … really good deal going on right now.”

In the quest of capturing his first track crown, Guererri was just as content considering the extent of competition he faced Thursday as well as every Saturday night at his weekend stomping grounds.

“I’m happy to be up here (podium). We had a good car, just not good enough,” said Guererri, looking to dethrone younger brother Matt Guererri, the two-time defending Sportsman titlist at the fairgrounds. “We were a third or even fourth-place car, Buff was faster at the end.”

“Just goes to show what the competition looks like here on Saturday nights. A lot of Canandaigua cars up front so I’m pretty proud of that,” added Guererri, noting the group of weekly track regulars that comprised seven of the Top-10 spots on the final scoresheet.

The series returns to the Ontario Co. Fairgrounds in Canandaigua alongside the Big-Blocks once again when LOLR stages its second stop for both tours on Aug. 18. It will be the third Sportsman qualifying event leading up to the 4th Annual Gerald Haers Memorial on Sat. Sept. 17 with Karl Comfort joining Corcoran as guaranteed starters in the season-ending autumn attraction.

With the 59th season naering the halfway mark, be sure to follow the point standings and breaking news online by visiting www.LandOfLegendsRaceway.com.