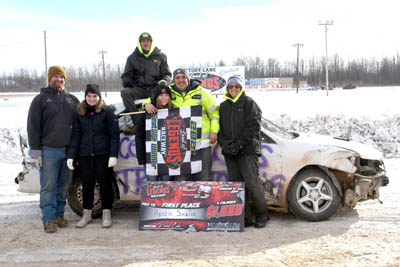 Delayed from New Year’s Day due to unseasonable warmth and soft ground conditions, frigid temperatures and a frozen track surface proved to be the winning combination for Shawn Mills and Austin Susice as they split twin 50s in ‘Hangover II – Next Round’ presented by Nashville’s Rockin Country Redneck Tavern and Eric Martin to launch Land Of Legends Raceway’s 2022 season.

The Saturday afternoon showdown held Jan. 22 attracted 77 full-fender entries with Mills and Susice each earning a cool $1,000 for their enduring efforts witnessed on a cold yet sunny day in the scenic Finger Lakes Region of New York State.

Jason Anasiewicz from Alden and Susice chased Mills in the lead-off 50-lap 6-Cylinder main while Mills and Tim Ellison from Waterloo crossed the stripe behind Susice in the 50-lap 4-Cylinder finale. Both runner-ups collected $300 and third-place finishers pocketed $200 in the 20th Hangover happening, this winter staged on the historic Ontario Co. Fairgrounds oval for a second straight time.

Unlike LOLR’s inaugural off-season enduro event run 1/1/21 with low 30s and muddy conditions prevailing throughout the day, an all-time ‘Hangover’ record low of -12 degrees greeted both dedicated speedway staffers and hearty racers when gates unlocked at 8:30am. By the time the first green flag dropped at 12:15pm temps rose to 16 for 6-Cylinder competition, eventually climbing to 21 degrees as 4-Cylinder drivers toured the tundra an hour later.

Looking to match his success found one year earlier, Susice bolted out front to open 6-Cyl. Action yet his title defense only lasted a single circuit as fellow Western New York traveler Kramarz moved ahead the next time around. Contact by Kyle Wilkins knocked Kramarz high into the turn 3-4 snow bank giving Wilkins the lead yet Anasiewicz was in prime position to inherit first-place after Wilkins slipped up entering corner four on lap 13.

At the halfway mark Anasiewicz paced the dwindling 27-car starting field with last-place starter Mills, Wilkins and brother Kale Wilkins the only cars scored on the lead lap as genuine ‘slide jobs’ became the order of the day. Mills waited five more laps to make his winning move, forging the final lead change with still 20 to go then keeping his Mills Logging Pontiac G6 out front the remainder of the way.

“I honestly just looked forward, didn’t even know where I was,” divulged Mills, the Windsor wheelman recognized as the final 6-Cylinder entry to sign in on raceday. “Like everybody else, I was having trouble (in turn 4). When you came out of there its a sheet of ice right to the wall so you can just literally shut the car down and drive through the bottom, that was about it.”

Mills was the lone driver to complete the prescribed distance as runner-up Anasiewicz aboard a Buick LeSabre ended the race one lap down while Susice settled for third-place two laps back steering his time-tested Toyota Camry.

“Wasn’t really too bad out there, I had a windshield and heat,” Mills smiled. “Even took off my gloves because my hands were sweating. But I’ll have them on for the next race without a windshield in that (4-Cyl.) car. My son (Collin) will be running in that one too. He’s the one that got us into this stuff last summer, got me interested and here we are.”

While a handful of lead changes highlighted the initial 25-mile main, Susice never relinquished the top spot in the 4-Cylinder matinee. Falling a lap behind in the early stages, Mills did in fact rally to pass Susice on lap 36 yet ran out of time in his attempt to track down the Ransomville ridge runner and sweep the afternoon card.

“Thought my (6-Cyl. Car) that’s really nice was going to be better in the first race,” noted Susice, who captured the opening 6-Cylinder segment in last winter’s mudfest that was stopped four laps short while the scheduled 50-lap 4-Cyl. follow-up won by brother Cole Susice was ultimately cut in half due to exorbitant attrition. Susice now joins Tim Phillips as the only other back-to-back ‘Hangover’ race winner as Phillips captured 8-Cylinder events run at Ransomville Speedway in 2015 & ’16.

“Tried to set a faster pace the first time out too but we had electrical issues early on, just wouldn’t go. In this (car) here there is no clutch left so I couldn’t shift it, just puttered along. Started running the top pushing the cushion, just kept the front nose clean with this one and it worked out. But I’m very cold. Shouldn’t have taken out the windshield, holy, I am froze right now,” quivered Susice, after his second Toyota Camry mount carried him to the lucrative win for a second time in wine country.

Susice once again jumped out early despite filing in sixth on the 4-Cylinder grid yet this time he kept his foot on the pedal and mechanical issues never affected the outcome. Although a bigger field meant more track blockage as the laps clicked off, Susice never faltered as his slick track experience would once again pay big dividends on the spacious Ontario Co. oval. All that slowed him was a rare flag, thrown just shy of the halfway point when the door of Evan Reardon’s Chevy Malibu opened to expose the driver on the front chute, creating a significant safety concern.

Back under green, Susice was back on the gas although 38th starting Mills was quickly gaining ground following a predominantly high line around the hallowed half-miler. Mills’ methodical maneuvers through traffic allowed him to reel in the leader, and although he was able to regain his lost lap, the chase ended with still a quarter-mile separating him from a second $1,000 payoff. Ellison came next, two laps down to the leaders, after beginning 19th in the half-century grind.

“Definitely had a lot of fun out there, just to see everybody here on a cold day and all the help given by the track staff to put on this show is remarkable,” stated Martin, father of current Sportsman campaigner Dalton Martin, on behalf of headline sponsor Nashville’s Rockin Country Redneck Tavern. “Another great job by the LOLR TV crew, all the exposure they’re able to bring to Canandaigua racers and getting these events out to the fans.”

SKIDMARKS
Along with stock car studs Susice and Mills, the list of drivers slated to perform double-duty included Ellison, Zach Herman, Holley Comfort and brothers Jamie Jr. & Justin Eldredge, the reigning Hobby division points king in Canandaigua. Brin DePuy and Holly Sand made it an even half-dozen on the pre-race list of aspiring female contenders.

A moment of silence was observed prior to the playing of the national anthem for former LOLR racer and points champion Scott Schrader who passed away unexpectedly Jan. 19 at age 62. Also a drag racer following his circle track days, Shortsville native Schrader earned a pair of Sportsman titles (1992, 2005) and racked up 18 feature wins (9th all-time), adding two Expert/Novice Stock division (1978-1982) victories and his lone Big-Block Modified triumph on Aug. 30, 1997.

The MighTea Boba-backed New Legends Sportsman division returns to the LOLR schedule in 2022 with the first round of competition pencilled in for April 30.

The lead-off ‘Saturday Spectacular’ includes qualifying and main events for five classes with races starting at 6:30pm. Pit gates unlock at 4pm, grandstands open at 5 o’clock and hot laps begin at 5:30pm. Grandstand Admission is $15 for adults and $13 for senior citizens while those 16 yrs. & under are FREE. Pit admission for all ages is $40.